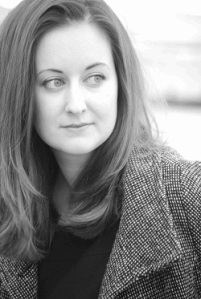 Kat Ellis’ debut novel Blackfin Sky was an unexpected reading gem when I discovered it in 2014. It’s a book I’ve thought of often, and fondly, since reading it as I remember the evocative setting and the quirky characters. It’s also one I hope, you will consider picking up as well. I’m thrilled to have Kat here today to talk about her debut novel.

Kat Ellis (KE): I enjoyed writing all through school, but didn’t really think about becoming an author until I was in my mid-twenties. So, I decided – very much on a whim – to write a book.

Naturally, I put in zero research, sat glued to my laptop for three months with my hands hardening into lightning-claws, until I finally had the crappiest of crap drafts to show for it. At that point I realized I’d need to do a lot better than that if I wanted to snag the attention of a literary agent and publisher, so I started reading books about how to write a good novel, and researching the process of publishing.

MP: What was the inspiration for Blackfin Sky?

KE: The starting point of the story – that Skylar Rousseau has drowned and been buried for three months when she shows up at school as though nothing has happened – snaked its way into my brain of its own accord. I liked the idea, and was looking for a genre-shift (up to that point I’d been working mostly on sci-fi and fantasy stories) so I decided to run with it, and build a story around how Skylar could possibly have reappeared.

I then got horribly stuck. I had ideas about how it might have happened, and why she might not remember it, but nothing seemed like the right solution for the plot. I was stuck in this rut when I went on a family outing to the traveling circus which comes to my town every summer. It was there, sitting in the stands, that I figured out the rest of what happened to Skylar during those missing months.

MP: One of the best things in Blackfin Sky is that the town of Blackfin is so very evocative. Did you look to any real locations while creating this fictional town?

KE: I love taking photographs, and when I’m not writing, I’m usually out photographing the local landmarks and creepifying them for my Tumblr. There are a number of places I photographed when I was thinking of locations to fit the story, including a centuries-old cemetery, a Victorian pier, a ruined chapel in the woods… all over the North Wales landscape, basically. And one of my neighbors, whosegarden backs onto mine, has a shed with a rusting weathervane perched on top of it (it’s possible I might have spent a minute or two staring at it through my kitchen window).

MP: Do you–or did yo ever–live in a town like Blackfin? If not, would would want to?

KE: My town isn’t all that much like Blackfin, but I think a number of places I spent time while I was growing up definitely influenced me when I wrote it. In particular, when I was little I used to go and stay with my grandmother in a tiny village surrounded by hills, in her old stone house overlooking thevillage cemetery. I used to love playing there, and never understood why people thought cemeteries were creepy.

That said, even I think Blackfin is pretty weird, and I probably wouldn’t want to live there.

MP: Without getting into spoilers, we learn that Sky and some of the other residents in Blackfin have unique talents or abilities. If you could, what special talent or ability would you want to have?

KE: Literary osmosis! If I could somehow instantly upload books into my head, or download them from my brain onto the page, that would be absolutely amazing. I say this as I’m staring down the barrel ofa TBR pile that could tip over and bury me at any second, and more stories to write than I will ever have time to finish.

MP: Blackfin Sky includes quite a few revelations for Sky and her family over the course of the novel. How did you lay out the pacing of this story? How did you decide when to reveal key details to the reader?

KE: A few people have told me Blackfin Sky is like a giant jigsaw, with lots of tiny pieces that all lock together by the end. (I love this comparison, by the way.) Truthfully, I had to write it out in layers. First came the main plot arc, then I wove in a subplot thread, then another, and another… It got messy at times. That was where having fantastic critique partners, editors, and an agent came in veryhandy!

KE: I can! Breaker is my next book, and it will be released Spring 2016 from Running Press Teen.

Breaker is about Kyle, a serial killer’s son who enrolls in a new school after his father is executed, and finds himself drawn to a girl in his class – only to discover she is the daughter of his father’s last victim.

KE: Read as much as you possibly can. Books in the genre/area you want to write, books outside that genre/area, books and articles on writing craft, and about the publishing industry. Find other writers who will give you feedback on your work. Do the same for them. Practice writing until you hate words, then practice until you love them again.

Thanks again to Kat for a great interview.

You can see more about Kat and her books on her website.

You can also read my review of Blackfin Sky here on the blog.