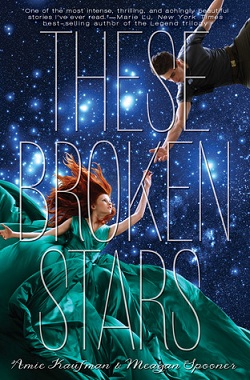 Tarver Merendsen would be quite happy to be anywhere but on board the Icarus. Being on the luxury spaceliner is certainly easy with finely appointed public areas and beautiful people everywhere. But it is also claustrophobic with cameras and gossips everywhere eager for a sighting of the famously young and heroic Major Merendsen. If Tarver had known his actions on Avon would lead to this kind of attention he might have made very different decisions while dealing with the rebels on the terraformed planet.

As the daughter of the richest man in the universe, Lilac LaRoux knows all about terraforming new planets and the unrest that sometimes come with colonization. She knows more about space travel and technology than is seemly for a girl of her station. She also knows that it would be very, very unwise to have anything to do with an upstart military man like Tarver. So Lilac does what she always does and pushes him away.

Unfortunately that doesn’t matter much when the Icarus is pulled out of hyperspace and crashes.

Suddenly Lilac and Tarver are thrown together on a seemingly abandoned planet.

With no one but each other, this unlikely pair builds a grudging respect and even friendship. As their relationship turns into something more than either could have imagined, Lilac and Tarver’s dreams of a life together are derailed by the strange mysteries on the planet and the impending threat of rescue in These Broken Stars (2013) by Amie Kaufman and Meagan Spooner.

These Broken Stars is the first book in Kaufman and Spooner’s Starbound trilogy (which functions as a set of companion books each featuring different narrators). The second book is This Shattered World.

This book is written in alternating first person narrations as Tarver and Lilac tell their story.

The dual narration structure is used to excellent effect here to highlight Tarver and Lilac’s changing opinions of each other as well as to examine key plot points from multiple views. Although Tarver and Lilac’s voices are not always as distinct as they should be, the narrative is done so well that it is a minor problem at best.

The bond between the characters builds organically to create a romance with an extremely solid foundation based on mutual respect as well as affection. Unfortunately despite these stellar protagonists and a strong plot, the latter part of the novel does drag in places. Ultimately, however, the story does build to a stunning conclusion that will leave readers eager to see more of the world Kaufman and Spooner have created.

These Broken Stars is an atmospheric sci-fi story with hints of mystery and romance. Tarver and Lilac are both self-aware characters with as much agency as spunk. Lilac, a tech-smart girl, is a particularly satisfying character to watch as she comes into her own after the crash of the Icarus. An excellent and action-packed novel for science fiction fans.

Possible Pairings: Avalon by Mindee Arnett, The Stars We Steal by Alexa Donne, Magisterium by Jeff Hirsch, That Inevitable Victorian Thing by E. K. Johnston, Alienated by Melissa Landers, For Darkness Shows the Stars by Diana Peterfreund, A Confusion of Princes by Garth Nix, Across the Universe by Beth Revis, Under the Never Sky by Veronica Rossi, The Ghosts of Heaven by Marcus Sedgwick, A Long, Long Sleep by Anna Sheehan