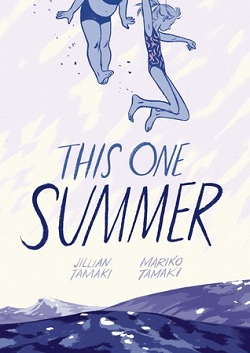 Rose has been coming to Awago Beach with her family every summer since forever. Rose’s summer cottage friend–and seasonal younger sister, of sorts–Windy, is always there waiting for a new vacation filled with fun and adventures.

But nothing is quite the same as it was even last summer. Caught uncomfortably between the familiarity of childhood and the wholly unknown world of growing up, Rose isn’t sure anymore where she fits in at Awago, with Windy, or even with her parents.

In a summer filled with things left unsaid–with change lurking everywhere–Rose and Windy realize that even as life threatens to shift in a new direction things like friendship can remain rock solid in This One Summer (2014) by Jillian Tamaki and Mariko Tamaki.

This One Summer received a whopping six starred reviews over the course of 2014. It is also the first graphic novel to ever win Canada’s Governor General Award for Illustration in an English Language Children’s Book (for illustrator Jillian Tamaki). (As Mahnaz Dar explains on SLJ this award has usually gone to picture books.) This One Summer also received a Printz and Caldecott honor in 2015 (this might have happened before but I can’t think of any instances).

It’s hard sometimes to remember that illustrations are a key part of the reading experience when looking at something that isn’t a picture book. Graphic novels, of course, are uniquely suited to demonstrate a perfect blend of illustrative and textual storytelling. Given the ways in which readers interpret visual and written “texts”, it’s sometimes hard to notice how well the two integrate. It is also, sometimes, too easy to ignore what is being done exceptionally well.

This One Summer is a deceptive book due in part to the seamless integration of graphical and verbal storytelling. In doing everything so very well here–so effortlessly–the Tamakis often erase their own work. Instead of seeing the intricate line work in each full page spread, we first see a beautiful picture. Instead of paying attention to how changing panels and page design move the reader through the story as easily as through a storyboard for a film, we initially only notice how quickly this book can be read.

Throughout the novel the Tamakis capitalize on the graphic novel format to push This One Summer in new directions and stretch just how a story can be told. The motion and physicality, particularly whenever Windy is on the page, becomes palpable with each new frame. The varied design as the story shifts between full page illustrations, two page spreads and smaller panels also serve to move the plot smoothly along.

With intricate illustrations and a nuanced, meditative plot, This One Summer is a subtle story about growing up and facing change that will resonate with readers of any age long after they read the final page.

Possible Pairings: Love and Other Perishable Items by Laura Buzo, Clarity by Kim Harrington, Saving Francesca by Melina Marchetta, The Summer of Firsts and Lasts by Terra McVoy, Unbreak My Heart by Melissa C. Walker