“But in all the stories, you have a single chance; and if you miss it, then it’s gone. The door isn’t there when you go back to look. There is no second invitation to the ball” 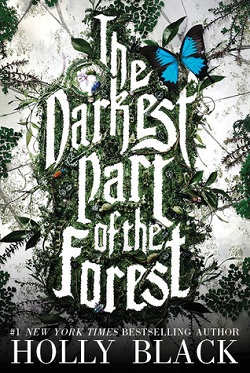 Even then, knowing the dangers, Hazel finds herself drawn to the dark things that lurk outside of Fairfold. With a sword and her brother Ben by her side, Hazel hoped once to become a knight and hunt the monsters that lurked in the Fairfold woods. But Ben put a stop to that.

Seven years ago Hazel made a bargain to try and fix things. To get back the life she thought she wanted. But that fell apart as well.

Now Hazel kisses boys with wild abandon and has fun, hoping to shore up enough in reserve for the day it all might be lost to her. But the payment for Hazel’s bargain is coming due and time is running out for regrets or preparation.

That is until the coffin in the woods is broken and the prince, who has been there for as long as anyone can remember, disappears. Until Hazel wakes up in her bed surrounded by dirt and pieces of broken glass with no idea how to fix anything in The Darkest Part of the Forest (2015) by Holly Black.

The Darkest Part of the Forest is a fresh-faced fairy story where the fairies are as as entrancing as they are dangerous. Black once again delivers a thoughtful, intricate story of magic and identity in this smartly modern tale.

The Darkest Part of the Forest takes traditional fairy tale tropes (not to mention gender roles) and turns them on their heads as this story infuses familiar lore with new twists and turns. Hazel, in particular, is a stunningly authentic and multi-faceted heroine. She is flawed and impulsive. She is genuine and kind. This story expertly negotiates exactly what agency and identity really mean not just for a girl in a small town but also for a girl with a self-proclaimed charge of saving that town.

There are other relationships in this story that are equally well done. Hazel and Ben come to understand each other as equals and family for perhaps the first time while both also come to terms with a less-than-idyllic upbringing. There is romance for both Hazel and Ben in unlikely places.

This novel also wonderfully examines the nature of family and the ramifications that come when people decide to choose their own–even if it is just for a time. Throughout the quests, the adventures, and the reconciliations, Hazel remains firmly grounded at the center of this plot. Her growth, particularly in the second half of the novel, is phenomenal as the narrative explores what it means to truly know oneself and trust oneself after years of doubt.

The Darkest Part of the Forest is a wonderful fantasy but where it really shines is as the sensational story of a girl who not only finds her place in the world but also finds herself when she chooses to face the darkness in herself as well as in the forest.

Possible Pairings: Loop by Karen Akins, Tiger Lily by Jodi Lynn Anderson, Chime by Franny Billingsley, The Game of Love and Death by Martha Brockenbrough, Guardian of the Dead by Karen Healey, Fire and Hemlock by Diana Wynne Jones, Winterspell by Claire Legrand, Beauty by Robin McKinley, I’ll Give You the Sun by Jandy Nelson, The Perilous Gard by Elizabeth Marie Pope, Vassa in the Night by Sarah Porter, The Shadow Society by Marie Rutkoski, A Darker Shade of Magic by Victoria Schwab, Lament by Maggie Stiefvater, All Our Yesterdays by Cristin Terrill, Black Dove, White Raven by Elizabeth Wein, The Replacement by Brenna Yovanoff, Dust Girl by Sarah Zettel