This week for Monday Memories I’m talking about The Winner’s Curse by Marie Rutkoski. 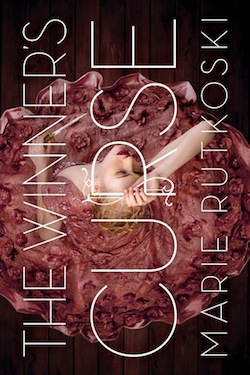 I would be remiss if I didn’t talk about this book before Monday Memories came to a close. I was lucky enough to receive an ARC of this books so I was able to read it early and had ample time to harass people to read it (even interviewing Marie on the blog tour which was a thrill).

It’s no exaggeration to say that this is one of my favorite books not only of 2014 but of all time. I am usually one of those horrible people who doesn’t buy books and instead holds onto ARCs (I just don’t have that much coin to spend on books, sorry) but this one I made an exception and bought a hardcover (something I plan to do with the rest of the series).

It’s thrilling to see a series I love so much getting so much attention with best of lists and good sales and I’m beyond excited to see how it all comes together by the end of the series.

The Winner’s Curse also reminds me a lot of Megan Whalen Turner’s glorious Queen’s Thief series so this one has the bonus of filling a Eugenides shaped hole in my heart now that I’m caught up with that series.

If you want to join the fun (until Monday Memories shuts down at the end of December), just add your link below.