Earlier this year the library hosted a yarn bombing of the youth wing entrance. It wasn’t organized by my department and I’m still not totally clear who put it together, but everyone was really excited about it. The feedback was fantastic and it generated a lot of interest in knitting and crocheting among the patrons who came into the library.

So after hearing from so many kids that they loved the yarn bombing and crochet in general, I asked my supervisor about the possibility of starting a Crochet Club for kids. This was in planning stages since August and I had my first two sessions in November (with a gap because of Thanksgiving).

Crochet Club isn’t exactly what I envisioned. But it’s close and it is getting there.

The first thing we did was a supply order. Because of where the library already has accounts, that meant I had to order from Dick Blick. Unfortunately that did mean there were some limited options but I did eventually find everything I needed.

The supplies I ordered were:

Before the program started I set down the age guideline of 6th grade and up (my target age was 11 I think but it got printed as 6th grade and up in our program flyers). Programs here tend to skew younger so I knew I’d probably get littler kids. My theory with that is that everyone is welcome to try but if they really aren’t catching on or into it, I’m fine with suggesting the kids leave to do something that’s more fun for them.

I intentionally avoided picking out any patterns as I wanted kids to pick up technique first. Because we are working with thinner yarn my initial idea was to have them make a sampler bookmark using chain, single and double crochet stitches. 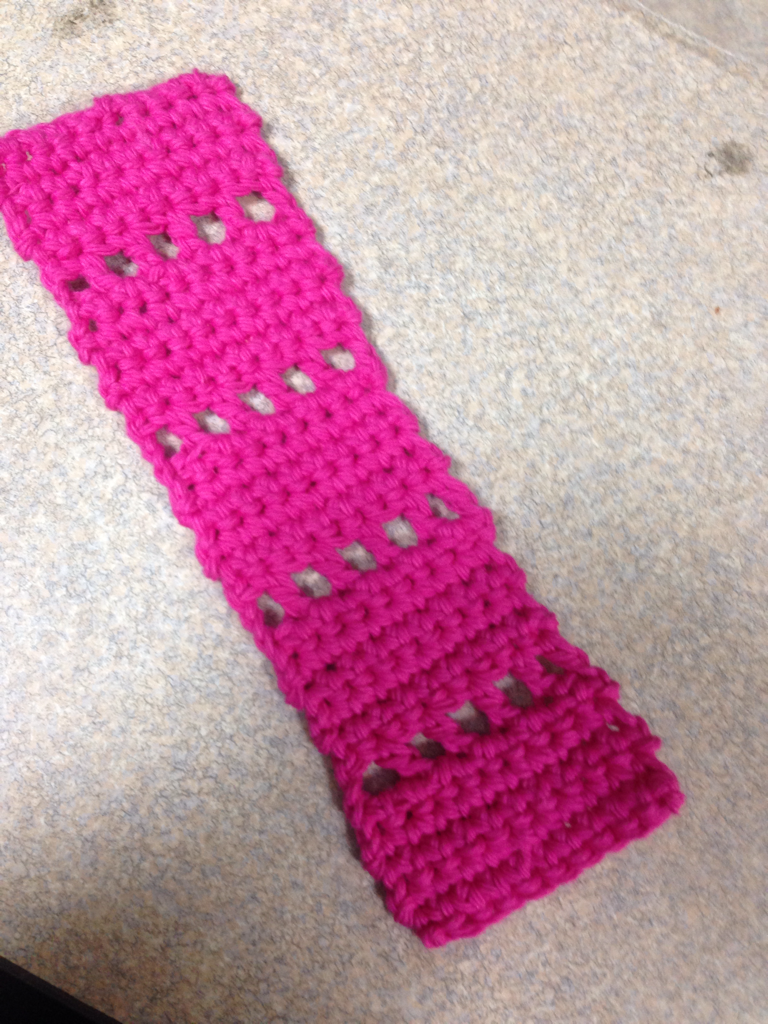 It turns out that was wildly ambitious even as a starting point. But that’s okay because it’s a learning curve.

At my first session I had one girl who was in fifth grade. She caught on quickly and left with a chain crochet necklace. She tried to do single crochet, didn’t like it and went back to chain crochet.

In my second program I had the same girl (who I didn’t recognize because she is never, ever in the library except for Crochet Club! I’m still so ashamed!) and several kids from the afterschool program that has arbitrarily decided to use the library as a base of operation.

The kids ranged in age from 5 to around 10. The 5 year old unsurprisingly wasn’t into it. I tried to show him how to finger crochet but that didn’t work either. He came and went saying hi to his friends and seeing what everyone else was up to.

The other kids ranged from advanced to super beginner. The girl I had my first week remembered everything she had learned and was a champ working by her self for most of the session.

A couple of the after-school kids caught on quickly–including a boy who was single crocheting for part of the program–but it was hard to police their technique. Everyone was working too tightly and I don’t know how to explain the tension to them in a way that makes sense. The kids also had some weird ideas about how to hold the crochet hooks in that they were using them more like picks than hooks (I think this is because some of them were coming from having done a Rainbow Loom program the day before). While that’s fine for chain rows, they were all working too tight to actually do anything with said chains.

(After thinking more about this I realized the kids were all grabbing any hook so they were working too small. I’m going to take a step back and start the class with an intro explaining skeins, hooks and gauge sizes. I’m also organizing supplies to make it harder for the wrong hook to be taken by the kids. In addition I plan on setting up a sign in sheet so that regular attendees can borrow supplies and also to discourage latecomers/advise when the program is at full capacity.)

Similarly the kids all seemed to have a hard time letting their left hand do any of the work which is what I am used to when I crochet. I am not sure if this is from years of practice or if it comes easily by virtue of being ambidextrous. (Speaking of which one girl who came was left-handed and figured out how to translate my right-handed demo to her needs like a boss.)

Moving forward I’ve discovered that I can’t let in late comers because it derails my ability to help others. Maybe if I get a regular group and they get more advanced that will work but not right now. I also think for the time being (particularly as the program skews younger) I’m going to try capping at 10 kids (or less) to keep things a little easier to manage as I’m the only one in the room with crochet experience.

I’m also going to start doing group introductions and some kind of sign in sheet so that I can learn names and so that, as we continue, regular attendees can also borrow hooks and maybe yarn (mostly hooks) to practice.

My other plan is instead of a one-on-one demo to try a group demo with the kids watching me to see if that’s easier than flitting from person to person.

Honestly, I’m thrilled with the progress the kids made even if some of their final products weren’t the prettiest. One girl in particular had a hard time getting started but she also said she plans to practice before the next program. They all were enthusiastic and excited to be there which is all I could have asked for.

Have you ever taught someone else to crochet? Any tips or anecdotes?