I’ll be the first to admit these November displays are a bit off-the-cuff but they did teach me a bit about the collection along the way.

For my first “mini” display I did a Chilling Reads sign. The vision behind this was to have books that were set in the winter. It turns out we have blessed few books in the collection that are not checked out and set in winter.

This display will probably stay up through December because I am quite taken with the sign and it can have many permutations to fill in with books.

For my bigger display I was totally stumped for what to do until Karyn suggested a NaNoWriMo (National Novel Writing Month) themed display. I’m not super happy with how it looks (the cover images are too small and I had sub-par tape to work with so you can really tell I was taping paper to a piece of foam core) but I do like the idea and I learned that many YA novels began life as NaNo projects. (In fact the only one on the sign that isn’t a NaNo project is Afterworlds but that one has a huge NaNo tie-in.) 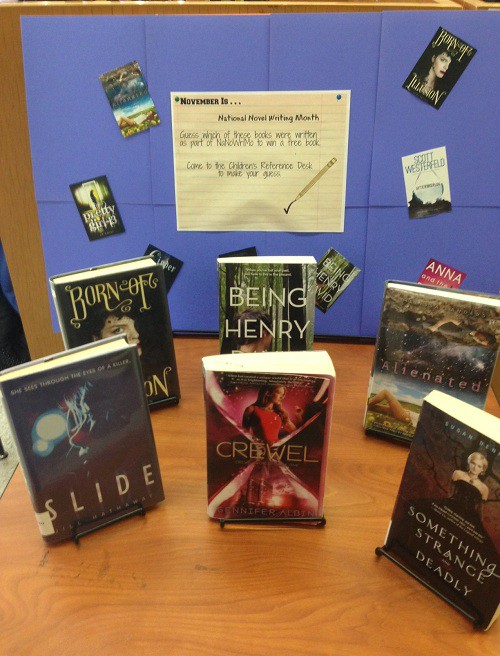 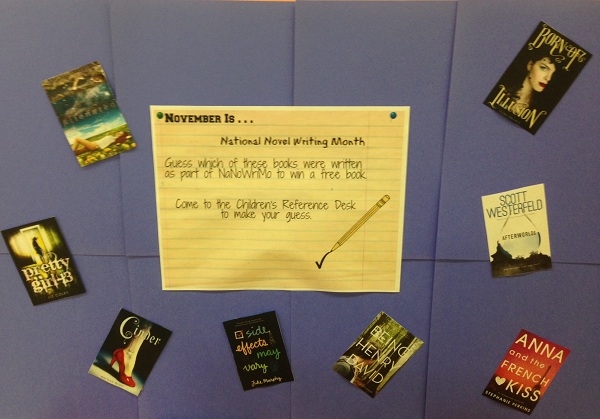 I am happy with the display in that the books on it have been moving which is, of course, one of the big points. The trivia aspect hasn’t gotten as much traffic but I do still want to have the option on there in some way.

I do plan on changing this out in December when I might do a Dynamic Duos display with some books about BFFs or otherwise great partners with a trivia aspect involving people naming the duo (like Maddie and Verity from Code Name Verity) with some quotes and cover images).

I’m also already looking ahead to January when I plan on having both displays involve books where characters seize the day.

What displays have you used in your library for the month of November?