“The sum and total of who I am and who I will ever be is already contained within me.” 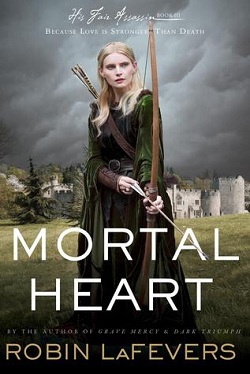 After years of proving herself the perfect novitiate, after passing every test, Annith’s future outside of the convent is less than certain. When she learns that the abbess wishes to groom her as the next Seeress, Annith knows it is time to strike out and choose her own path–wherever it might lead–in Mortal Heart (2014) by Robin LaFevers.

Mortal Heart is the conclusion to LaFevers’ His Fair Assassin Trilogy. It is preceded by Grave Mercy and Dark Triumph.

Like its predecessors, Mortal Heart works largely on its own since Annith is a new narrator and the arc follows her. The larger events of 1488 Brittany and the young Duchess’ struggles to hold onto her country continue as do the machinations of the Abbess.

Although there is a lot of overlap between these books in terms of their timelines, Mortal Heart is the first time readers truly get to know Annith as more than an extremely skilled and obedient novitiate of Mortain. However, Annith soon reveals that she has quite a bit of grit. Even without special gifts from Mortain like her closest friends, Ismae and Sybella, Annith is a fierce protagonist who is not afraid to seek out her own path.

Readers of the first two books will anticipate a certain order of events to this story. While many expected elements (and familiar characters) do feature here, Mortal Heart still has numerous surprises to keep readers guessing (or, more accurately, gasping in surprise).

As always LaFevers delivers a well-researched historical fantasy as well as a detailed author’s note separating fact from fiction and outlining the actual historical events featured in the novel. This book is well-plotted with a perfect balance between new story and tying up elements from the previous installments in the series. Mortal Heart is an expertly written conclusion to a delightfully clever series. The only regret readers will have is realizing that the series is truly over.

Possible Pairings: The Wrath and the Dawn by Renee Ahdieh, The Candle and the Flame by Nafiza Azad, Hunted by the Sky by Tanaz Bhatena, Three Dark Crowns by Kendare Blake, Brightly Woven by Alexandra Bracken, Etiquette & Espionage by Gail Carriger, The Girl of Fire and Thorns by Rae Carson, Graceling by Kristin Cashore, Fire by Kristin Cashore, The Star-Touched Queen by Roshani Chokshi, The Wicked and the Just by J. Anderson Coats, Vessel by Sarah Beth Durst, The Lost Sun by Tessa Gratton, The Shadow Behind the Stars by Rebecca Hahn, The Agency by Y. S. Lee, Shatter Me by Tahereh Mafi, The Winner’s Curse by Marie Rutkoski, The Sin Eater’s Daughter by Melinda Salisbury, Poison Study by Maria V. Snyder, The Boneless Mercies by April Genevieve Tucholke, The Thief by Megan Whalen Turner