Banned Books Week is a week-long event to raise awareness about the dangers of banned books as well as to celebrate the intellectual freedom that people enjoy by reading books and having books available in their libraries or schools.

If you want to know more you can visit BannedBooks.Org. The American Library Association also has a handy Banned Books Week landing page with a lot more information. School Library Journal also has compiled many useful resources.

At my library we were floating around a lot of ideas but sadly a lot of our ideas came a bit too late to implement ahead of Banned Books Week.

But today I had some time to put together some quick displays based on these amazing Banned Books mugshots that the head of my department found here: http://www.buzzfeed.com/briangalindo/5-criminal-mugshots-of-characters-from-banned-books#2wgtn3j

We made color printouts of each mug shot with an attribution credit as well as a sign noting when Banned Books Week takes place. I had also wanted to start an interactive display/trivia thing to get teens free books so our first question is asking teens to identify the books from which the mugshots were selected to win a book.

Then I put out a lot of banned books from our collection. 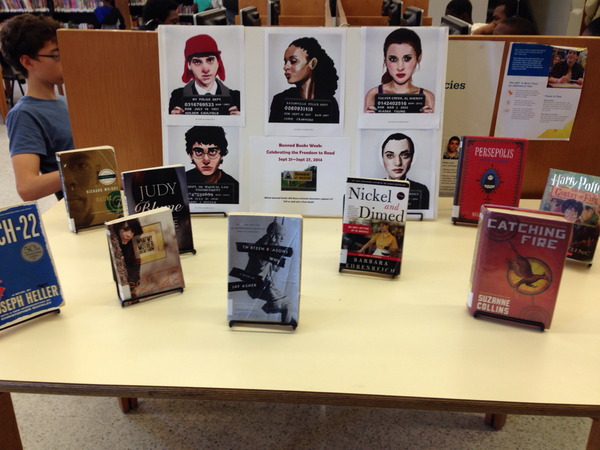 Since this is not the only display space we have in the teen area, I decided to make another display.

For that display I had an extra mugshot of Holden and I made a quick sign in PicMonkey. For the sign I found a Lorem Ipsum image that I could use at the background and then added text to it saying “Exercise YOUR Right to Read” and again added the dates for Banned Books Week and put some books around it. 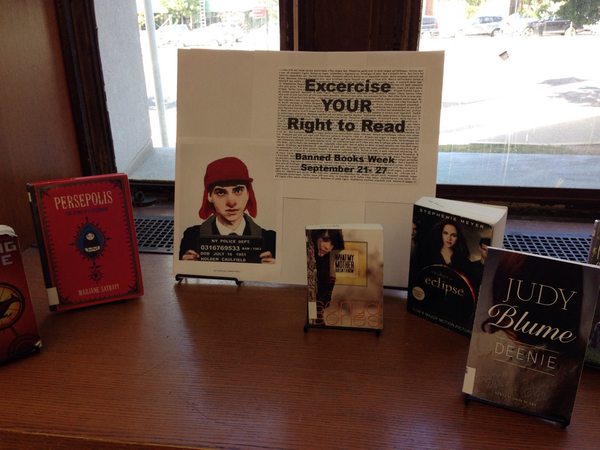 (If you have noticed a typo, don’t worry because I did too. When I went out to fix it I even saw a girl browsing some of the books on the tabletop display.)

Given the time spent, I’m pretty happy with how everything looks and I plan on using this sign/book display in future to keep things fresh because it’s a lot easier than having images mounted on walls (especially since we don’t have much wall space). I particularly like my sign talking about the right to read because it brings it back to the idea of intellectual freedom and I generally think anything with Lorem Ipsum involved looks pretty neat.

What are you doing to mark Banned Books Week at your school or library or blog or  just in your heart?