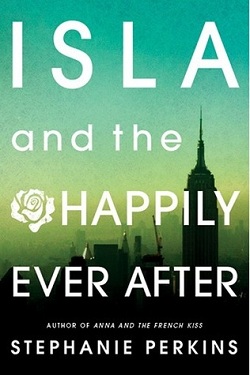 Isla Martin has had a hopeless, all-consuming crush on Josh Wassertein since their first year at the School of America in Paris. After years of pining, Isla has grown used to watching Josh from afar.

Then one magical, painkiller-fueled, chance encounter in New York the summer before their senior year changes everything.

After years of bad timing and missed connections, Josh and Isla are finally together. But with false-starts and near-misses aplenty, neither of them is sure this relationship is meant to last. Isla doesn’t understand how someone like Josh can ever feel as deeply for her as she does for him. Neither is sure how to deal with the growing pains and doubts that stem from their new, intense relationship.

With uncertain plans for college and the future looming,  Josh and Isla will have to learn to be apart before they have any chance of staying together in Isla and the Happily Ever After (2014) by Stephanie Perkins.

Isla and the Happily Ever After is the highly anticipated conclusion to Perkins’ loose trilogy that began with Anna and the French Kiss and continued with Lola and the Boy Next Door. These books function as perfect companions to each other but Isla’s story is very much her own and functions as a standalone. Readers who have followed these books from the start, however, will be pleased with cameos from all the obvious suspects toward the end of the novel.

While much of the story focuses on Isla and Josh’s fledgling relationship, Perkins also artfully explores changing friendships as well as the complexities relationships with sisters. Kurt, Isla’s best friend, is an especially wonderful addition to the story. Isla’s panic at facing her future both in terms of college and life beyond is authentic and well-handled throughout the story.

Although Josh and Isla are perfect together, Isla’s growth is happily a solo endeavor as she is forced to acknowledge her flaws as well as her strengths and wants. Isla (and Josh) are often foolish and make mistakes but they also both learn and begin to thrive because of them.

Perkins is a master when it comes to writing clever, swoony romances. Josh and Isla are perfect counterpoints to each other in this story about first love and growing up. Isla and the Happily Ever After is an apt conclusion for these characters and a perfect romance for anyone looking for a smile.

Possible Pairings: Girl Overboard by Justina Chen, Graffiti Moon by Cath Crowley, When It Happens by Susane Colasanti, Better Off Friends by Elizabeth Eulberg, King of the Screwups by K. L. Going, To All the Boys I’ve Loved Before by Jenny Han, Alice, I Think by Susan Juby, The Piper’s Son by Melina Marhcetta, Damaged by Amy Reed, Eleanor & Park by Rainbow Rowell, The Geography of You and Me by Jennifer E. Smith

4 thoughts on “Isla and the Happily Ever After: A Chick Lit Wednesday Review”