Once again I went to BEA with real life bestie Nicole AKA the Book Bandit. This year we were (again) lucky enough to be Press approved.

After my planning madness from last year, I decided to do a mellower BEA. Not a lot of paper just a list of books I wanted on my phone and a detailed schedule in my phone calendar.

Here’s how it went (You can also read Publisher Weekly’s BEA wrap up on their site for a more bookish rundown and YA Interrobang covered every panel at BEA which is something you won’t find in this recap.):

Thursday started bright and early with Nicole meeting me at my place. We had breakfast with my mom and Nicole dropped off some items she’d need the next day (AKA our twelve hour day where she’d be sleeping over) before heading out. We decided to go crazy and cab it to the Javits center which is a decision I stand by.

Since we did not go to blogger con on Wednesday, the day started with badge pick up at the press office. It was off hours at the press office so there was no line. I got to share the pain with the gentleman who processed our paperwork when loud music started blaring from the exhibit floor. That, happily, stopped before the show opened.

Thursday was easily my most stressful BEA day because all of the authors I wanted to see were signing at the same time. However, I was prepared because that’s how I roll. Nicole and I were on line and ready to head into the show floor well before 9am with a clear plan: stop by the booths for publishers who had books we were seeking to get drop schedules (for when books are given away) or to see what was already out all while heading to the autographing area.

Along the way I managed to acquire an arc of Mortal Heart by Robin LaFevers from the lovely people at Houghton Mifflin Harcourt. Since this was one of three books I came to BEA specifically to get, let me just say it was a very good start to the day. (Later in the day Nicole would surprise me with an ARC of Dearest by Alethea Kontis (again from Houghton Mifflin Harcourt.)

After that it was a bee-line to the autographing area. While Nicole went to get Vault of Dreamers by Caragh M. O’Brien I dutifully waited in line–a full hour early–for Garth Nix. Two things to know about Garth Nix: He’s Australian so he is almost never in New York for signings. He’s also releasing a prequel to the Abhorsen books called Clariel which he was signing for only a half hour. While I held the line, as it were, for myself and Cecelia (from The Adventures Cecelia Bedelia) and her sister Ginny, Nicole went to some other signings.

The wait was worth it though as I got to chat with Cecelia and Ginny (luckily no one yelled at me for holding places because they came so early!) while we waited.

After Garth Nix, the three of duly went to see Caragh M. O’Brien. I haven’t read the Birthmarked series yet but since my dear friend Kaila is a superfan I am very excited to get to her newest one. 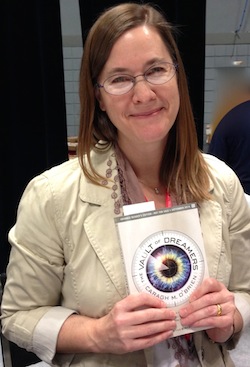 Caragh O’Brien with The Vault of Dreamers

That first hour was probably my most stressful time at BEA because I wasn’t sure I’d be able to do everything. But I did and after that, the day continued to be made of win.

I lost track of Nicole for a while when she went to see Rainbow Rowell and get a signed copy of Landline (I was still working through the Nix and O’Brien lines). Afterward I wandered the floor a bit but it wasn’t quite the same without someone to keep me company.

Eventually we reconnected and did some exploring. I got some totes at this point including an Epic Reads one from Harper.

At 11am we headed back to the autographing area in the hopes of meeting Steve Brezenhoff who was signing Guy in Real Life (he was also wearing an Iron Maiden t-shirt which I’m sure Nicole will point out in her own recap). His line was longer than anticipated but still totally manageable and he was super nice!

After that we tried to catch Amy Plum signing After the End but, as expected, her line was soooooo long we had to skip it. We did stop by Scholastic for a rather intense drop of Sinner by Maggie Stiefvater which was worthwhile of course. I even got to meet one of my fellow twitter-ers, Nikki Mutch, who does publicity at Scholastic. Yay for real life meetings with internet friends!

Then it was time for lunch which is always thrilling at BEA because it means we can sit down!

Thursday afternoon was relatively quiet compared to the morning. Our first stop was Tara Altebrando’s in-booth signing of The Battle of Darcy Lane because Nicole is a super fan and I am also a fan (pro tip: Darcy Lane is a street, not a person. Now you know!). This was a bonus because I also got to see Valerie Howlett–a publicist I have worked with before from Running Press.

After seeing Tara, I had a very important thing on my schedule at the Macmillan booth. After getting Mortal Heart and Dearest, this might have been the most critical part of my non-signing day. I needed a Little Elliot in the Big City tote bag. I cannot stress enough how fantastic this picture book is or how glorious the actual tote bag is. To better underscore the point: I needed this bag. So yes, I did wait roughly twenty minutes milling around the Macmillan booth to make sure I got one. And it was everything I hoped for.

After that we headed back to Autographing where, amazingly, Aaron Becker did not have a huge line while signing Quest. This was a great turn of events obviously.

Magnificent tote bag and Quest in hand, it was then time to head to the Science Fiction Writers of America booth where, thanks to Twitter, I knew that Sarah Beth Durst was signing copies of her new book for adults The Lost. Since I had already given away my arc and since I like seeing Sarah, Nicole and I decided this was a great plan.

It was actually even better than I hoped because Sarah knows me from twitter and book signings and interviews now so we even got to chat. (This was days before starting Shiny New Job so I even had exciting news to share!) Sarah is delightful and The Lost really is a clever book so I recommend you check it out. 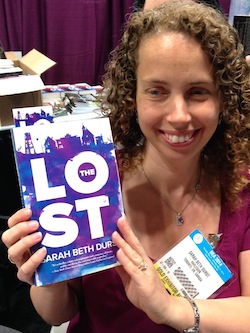 Sarah Beth Durst holding a shiny copy of The Lost

After Sarah signing it was back to the autographing area. Since Famous in Love was high priority for both myself and Nicole, seeing Rebecca Serle next was a no-brainer. Rebecca had injured her shoulder but she was looking very stylish with a scarf sling and did stamp every book with a very glamorous R.

Rebecca Serle at her signing for Famous in Love

Next it was time to see the Steads–Rebecca and Phillip Stead–picture book authors and illustrators extraordinaire. This year they were signing A Sick Day for Amos McGee and Phillip was also signing Sebastian and the Balloon. I always find the Steads very snazzy and like to pretend we have a bond since Erin used to work at one of my previous places of employ. Also, who doesn’t love A Sick Day for Amos McGee?

By the time we finished with the Steads, Nicole and I discovered any signings we had been considering had lines too long to fathom so after one more trip around the exhibition floor it was time to bring our first day of BEA 2014 to an end.

Check back tomorrow for my recap of Friday at BEA!