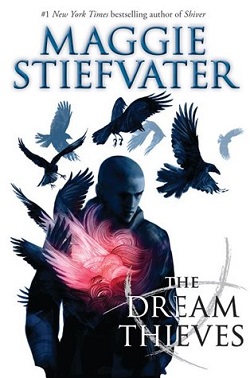 Everything changed for Blue, Gansey, Ronan and Adam before they ever found Cabeswater. Things changed for Noah long before that.

Now that the ley lines have awakened even more changes are coming to the small town of Henrietta. There will certainly be more moments of wonder; maybe even things coming close to magic. But darker things are also being drawn to the power of the lines.

It wasn’t, after all, everyone who had a pet raven named Chainsaw. Nor was it everyone who acquired such a pet from his own dreams.

As Gansey’s search for Glendower and Cabeswater continues it soon becomes clear that Ronan’s dreams are at the center of their latest puzzle. But with so many people searching and grasping for pieces of Cabeswater, it’s unclear how much will have to be lost before the next piece of the puzzle will be found in The Dream Thieves (2013) by Maggie Stiefvater.

The Dream Thieves is the second book in Stiefvater’s Raven Boys quartet. This book picks up closely after the conclusion of book one, The Raven Boys. While both books are delightful on their own, it’s unlikely readers new to the series will be able to catch up without reading the first installment.

This book focuses much more on Ronan even as Stiefvater continues to delve into the mysteries surrounding Glendower and Gansey’s search. Blue and Gansey have their moments, of course, but it was a pleasant surprise to have the book focus so much on Ronan. (Even more of a surprise to realize how very likable he is as a character.)

Stiefvater’s writing is top-notch as this series continues. The focus on Ronan’s dreams and a new secondary character takes the story in a new direction while Stiefvater’s beautiful prose and familiar characters continue to deliver everything readers will remember with fondness from The Raven Boys.

The Dream Thieves is a perfect blend of skillful storytelling and suspense as tension builds until the final confrontations in the story. Being the second book in a series of four, there are (of course) several questions left by the end of the story including a very surprising ending. That said, Stiefvater delivers everything fans will hope for and expect from her in this novel along with a story that is certain to resonate with readers.

Possible Pairings: Loop by Karen Akins, The Hazel Wood by Melissa Albert, Unspoken by Sarah Rees Brennan, Blackfin Sky by Kat Ellis, The Accident Season by Moïra Fowley-Doyle, Clarity by Kim Harrington, Fire and Hemlock by Diana Wynne Jones, Once a Witch by Carolyn MacCullough, The Left-Handed Booksellers of London by Garth Nix, It Wasn’t Always Like This by Joy Preble, The Shadow Society by Marie Rutkoski, The Price Guide to the Occult by Leslye Walton, Extraordinary by Nancy Werlin, Pivot Point by Kasie West, The Replacement by Brenna Yovanoff