Nicole, The Book Bandit, and I have decided to do a Synchronized Reading of Fangirl by Rainbow Rowell starting this week. You can read Nicole’s explanation of things on her blog (and should since it has scientific proof–meaning she wrote down–that we are BFFs).

Nicole and I are both insanely excited about Fangirl so we waited a full hour (maybe two?) in line at BEA to see Rainbow (I harass Rainbow Rowell on twitter constantly so I’ve decided that means we are friends and I can call her by her first name–Nicole will back me on this logic) and get signed arcs of Fangirl.

I’ve been kind of overwhelmed by my to read pile I decided to pick out the next few books I would be reading and Fangirl was high on my radar. When Nicole said that she was reading Fangirl after she wrapped up a read-a-thon challenge, I decided to pick up Fangirl as well so that we could do a Synchronized Reading.

What is a Synchronized Reading, you ask? Nicole sums it up best:

“It’s kind of like synchronized swimming minus the water and swim suits … and the theatrics.”

Basically we’ll both be reading the same book at the same time (at our own paces) which surprisingly doesn’t happen very often despite the fact that we often read the same books. We will also be posting some special content on both of our blogs during the Synchronized Reading but we’re still working on the schedule for that.

(I’m not allowed to use post-its or high lighters in books because I overuse both so I’m preparing with cryptic goodreads status updates instead.)

Then, because we take all endeavors seriously, Nicole and I also decided to do a couple of other things to prepare. In other words: We got themed manicures to match the cover of Fangirl. Since Fangirl only has a couple of colors on the cover, planning was pretty simple.

I was especially excited to see I had the colors I needed in my personal nail polish stash. 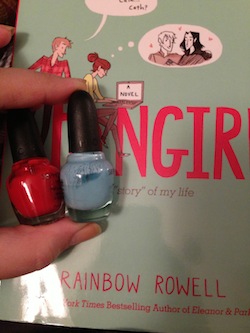 (That might be the only post-2000 photo in existence where my nails do not have nail polish on them.)

My mom doesn’t really understand the point of accent nails. But Nicole and I like them. So Nicole got a blue-green manicure with a red accent nail:

While I gave myself a red manicure with a blue-ish accent nail: 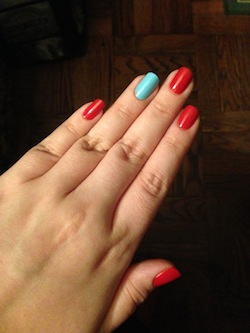 Then to take it to the next level I’m also using a handbag that kind of matches the cover (and I’m so good that I didn’t even have to plan that part! It just happened naturally!). 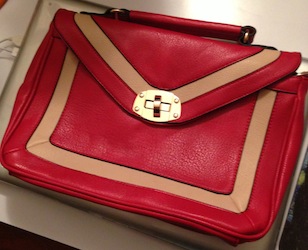 In summary: Nicole and I will be reading Fangirl by Rainbow Rowell together. We will be blogging about it. It will be awesome. You, too, can read Fangirl starting on September 10, 2013 when it officially releases.