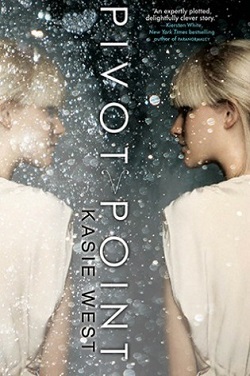 Addison Coleman always knows the right choice to make, the right path to take. She knows because she is cautious and a compulsive planner who likes to follow the rules. She also knows because of her ability, Divergence.

Being Divergent isn’t the coolest ability in the paranormal compound Addie calls home. She can’t erase memories like her best friend Laila or move things with her mind like the Telekinetics on the school football team.

Instead, when faced with a choice Addie can Search her future and see both outcomes for any given decision.

Most of the time Addie’s ability is downright boring.

When Addie’s parents announce they are getting divorced, her ability suddenly becomes much more important.

One Search six weeks in the future should be more than enough to make the decision of which parent to live with. In one future Addie can find true love and happiness while in the other there is a promise of popularity and excitement. But in either Search there is also something much more dangerous and the potential for a terrible loss.

Pivot Point is West’s first novel. (She already has the sequel slated for 2014 called Split Second and an unrelated contemporary novel called The Distance Between Us is due out in the interim.)

West provides all of the best parts of books about parallel universes and time travel without the messy (and sometimes sloppy) explanations. The world building here and the rules for the paranormals’ abilities are seamless.

Told in chapters that alternate between both paths* Pivot Point is a sleek, original story with perfect pacing. Alternating between key events, West brings the storylines together in clever ways while keeping readers on their toes.

Filled with mystery, romance and just the right amount of witty banter, Pivot Point is an utterly appealing blend of fantasy/sci-fi elements in a contemporary setting.

*Each chapter cleverly starts with a definition of a word that includes the phrase “Para” or “Norm” for easy differentiation.

Possible Pairings: Loop by Karen Akins, Passenger by Alexandra Bracken, In Some Other Life by Jessica Brody, The Infinity of You & Me by J. Q. Coyle, Two Summers by Aimee Friedman, In Some Other World, Maybe by Shari Goldhagen, The Girl from Everywhere by Heidi Heilig, Once a Witch by Carolyn MacCullough, Hourglass by Myra McEntire, Parallel by Lauren Miller, Soulprint by Megan Miranda, Fair Coin by E. C. Myers, The Square Root of Summer by Harriet Reuter Hapgood, Divergent by Veronica Roth, The Shadow Society by Marie Rutkoski, The Raven Boys by Maggie Stiefvater, Time Between Us by Tamara Ireland Stone, All Our Yesterdays by Cristin Terrill