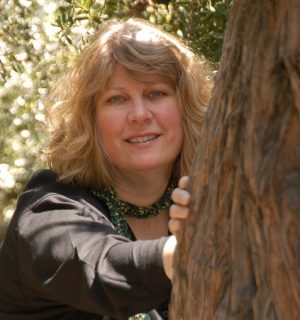 Robin LaFevers’ first YA historical fantasy Grave Mercy came out earlier in 2012. I was already a fan of Robin’s middle grade series featuring Nathaniel Fludd. This start to a series about assassin nuns in 1485 Brittany is another winner. Robin is here today to answer some questions about Grave Mercy.

Robin LaFevers (RL): I began writing when I was staying at home with my two small sons, looking for something for just ‘me’ and a way to maintain my sanity. I decided I would return to writing, something I’d loved as a teen but put aside for the real world. It took about ten years of practicing, attending classes and workshops, and writing some pretty awful stuff, but then my first book was accepted for publication, which was just as magical a moment as one thinks it will be.

MP: What was the inspiration for Grave Mercy?

RL: I knew I wanted to write the story of a girl who was utterly powerless and put her through all the trials and ordeals that would shape her into an instrument of power—not just physical power, but also the power to stand firmly in her own self and make her own choices and decisions.

For that kind of story, I needed a big, sweeping canvas with high stakes and lives and kingdoms at risk, and a time when teens were in a position shape the world around them. That search brought me to the middle ages and a world full of sacred relics, patron saints, and lots of social turbulence.

Then I stumbled across another fascinating research tidbit and learned that many women in the Middle Ages preferred joining a convent to marriage because convent life gave them more independence and autonomy than they could ever have as married women! That kind of lit my imagination on fire and began to play with what sort of convent would be the best avenue for my heroine’s journey, and I decided on a convent that would give her power over life and death.

MP: Although it is a fantasy, Grave Mercy is grounded in its historical setting of 1485 Brittany. What kind of research did it take to write about this time period? (Note to readers: If you want to know more about the history behind the story Robin posted an author’s note on her website here: http://www.robinlafevers.com/history/)

RL: One of the (many!) things I love about research is that not only I learn amazing details of how people lived and thought centuries ago, but there is such great story material as well. I’m not sure I could have dreamed up a twelve year old inheriting a kingdom, but once I stumbled across it in my research, I knew that was the perfect backdrop for the book.

Then I researched the time period, the politics, the geography, what everyday life was like back then, and the folklore and spiritual beliefs. I acquired all sorts of wonderful research books. (In fact, my husband insists I only write so I have an excuse to buy research books!) Luckily, I write in the age of Google, so I had access to a wealth of information, oftentimes I was able to look up ancient Breton lineages on obscure genealogy sites, or I would find that the walled medieval city where Anne lived still existed and I could see it online. I would spend hours studying the geography of Brittany, which lords owned which parts of the country and who was aligned with whom. Thank goodness for university websites and devoted history buffs, that’s all I can say!

MP: One of the best things about Grave Mercy is how seamlessly it blends history and fantasy. How did you approach writing about characters in this distinct time period? How did you go about capturing the right “voice” for your characters?

RL: One of the things I find most fascinating about writing historical fantasy is really trying to understand the worldview of people living in earlier times. What was life like without technology, where there was little understanding of science or the laws of physics and so much of life felt random and out of one’s control? Since Ismae belonged to a convent that served Death, what would her faith look like? How would her devotion be tested? What sorts of rituals would her life entail? Those questions were in the forefront of my mind whenever I sat down to write and helped me get into the head of a 15th century girl—what metaphors and similes would she use? What points of reference would she have? So that was probably the key to having her feel medieval on the page.

I also tried to (mostly!) use words that were only in use prior to the 16th century or phrases that felt reminiscent of that era. I definitely fudged sometimes; when the choice came down to readability I went for that over historical accuracy every time, because my overriding goal was that the story and the voice of Ismae be accessible to today’s teen reader.

MP: When you are not writing about teen nun assassins as Robin LaFevers you write books for younger readers as R. L. LaFevers including the Theodosia books and the much loved (by me) Nathaniel Fludd Beastologist series. What is it like writing for these different audiences? Does your writing process change?

RL: I wouldn’t so much say that my process changes, but that my sensibility changes. I am very aware of my younger audience when writing for them and feel very protective of their sensibilities–wanting to go dark enough to be spooky, but not so dark as to radically upset their worldview or perceptions of the world as essentially a safe place.

With Grave Mercy, I pretty much had to UNlearn all of those habits and give myself permission to cut loose. It was particularly difficult because I had Sister Lorna, my teacher in Catholic school when I was in 2nd grade, lurking on my shoulder quite a lot and muttering about irreverence and inappropriateness. It took a while to dislodge her, but I eventually did. :-)

RL: I think one of the things that fascinates me is that history feels like the place where magic and reality meet–so it feels like rich and fertile ground. So many of the things we think of as fantastical actually have their roots in history, whether old religions, folklore, ancient cultural practices, or mystery schools, so I like drawing from those sources because it grounds stories in the realities of the past and makes them feel more real. Also?I think it’s just hard-wired into me, a desire to see the small magics and mysteries that make life more interesting.

Also, one of the themes I’m drawn to is the issue of personal power and taking kids from feeling powerless to a place where they begin to feel as if they have some power over their lives. Fantastical power is a lovely, subtext-laden vehicle for personal power.

MP: When she arrives at the convent of St. Mortmain, Ismae discovers an affinity for poisons. Other daughters of Mortmain have other gifts to use in completing their god’s work. If you were to be a daughter of Mortmain what gifts would you have hoped to receive from Mortmain?

RL: I’ve always been drawn to the idea that death can be merciful or a gentle release, so I would definitely want gentle gifts of some sort, those that would allow me to ease people into death. A benevolent poison perhaps, or the misericorde.

MP: Set during a turbulent time in Brittany’s history, Grave Mercy is filled with political machinations and intrigue. As a writer, how did you go about pacing this aspect of the story and deciding what to reveal when?

RL: Gah! I nearly broke my poor brain trying to manage all that. I used colored index cards, complex timelines, plot diagrams, character grids broken down by act, colored pens. Pretty much any tool I could think of that would allow me to break down the elements into manageable pieces so I could then use the left side of my brain to reconstruct them in the best way possible. It also took about seventeen drafts over five years, which should give you an idea of how much I wrestled with it.

RL: My next project is Dark Triumph, the second book in the assassin nun series. Sybella is such a different character than Ismae! For one, she is noble born, not the daughter of a turnip farmer. But she has had a much darker and more traumatic past. And she is far angrier and more unstable than Ismae ever was, and has far more dark impulses of her own that she struggles to control. For all the bad things that had happened to her, Ismae was fairly innocent. Sybella however, has made some bad choices that have truly haunted her.

RL: 1. Write because you love it.
2. Give yourself the luxury of a long apprenticeship–allow yourself to really learn the craft and experiment with different styles and forms.
3. When you have learned the basics of the craft, then sit down and write that book. You know, the one you’re terrified to write. The one that is too hard, too scary, too weird, or too damn intimidating. Yeah, that one. That’s the one I can’t wait to read!

Thanks again to Robin LaFevers for taking the time to answer my questions. You can find more information about her books on her website.

If you want to read more about Gravey Mercy check out my review!