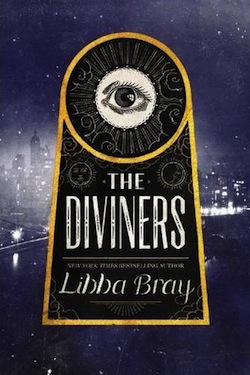 Evie O’Neill is thrilled when she is forced to leave her small hometown in disgrace. Sure, her parents are disappointed and her friends don’t know what to make of her strange party tricks. But that doesn’t matter because Evie is headed to New York City where she is pos-i-toot-ly going to have the best time.

But before Evie can start exploring all of the shops (and speakeasies!) that the city has to offer a flapper looking for a good time, she has to deal with her bachelor uncle. As curator of the Museum of American Folklore, Superstition, and the Occult (“The Museum of the Creepy Crawlies” to locals) Uncle Will has his own ideas about how Evie should conduct herself while in his care. Between Will’s taciturn assistant, Jericho, and his work at the museum, living with her Uncle is not what Evie expected.

New friends, dashing pickpockets, and giggle water aren’t enough to distract Evie from the strange things happening throughout New York. Grisly murders with ties to the occult leave the police stumped. When Will is asked to serve as a consultant, Evie thinks she might have a way to help catch the killer–if he doesn’t find her first.

Strange times are coming. A time where the natural order of things is threatened by very unnatural forces and people with special talents, like Evie, might be able to help. Evie is ready to help investigate a killer. But what if murder is just the beginning in The Diviners (2012) by Libba Bray?

The Diviners is the first book in Bray’s new four-book series set in 1926 New York.

With a keen eye for detail and authenticity, Bray brings Evie’s roaring world to vivid life. With spooky villains and a spunky heroine, this book is filled with everything fans of the flapper era will love. Bray makes her writing seem effortless as she easily evokes both the mood and landscape of the 1920s with her own unique touches.

The Diviners is a sprawling thriller sure to give you chills. At 578 pages (hardcover) there is no way to get around the fact that this is a long book filled with Bray’s signature rich writing. This isn’t a quick read but it is one that pays off in the end. Filled with multiple perspectives and a large cast of characters, The Diviners weaves together several story lines and unlikely companions as the plot moves forward revealing tantalizing details about each character as well as future installments in the series.

Being the first book in a series some questions remain unanswered with new ones raised for later in the series. That said, the story here easily stands on its own once you’re ready to commit to such a hefty tome. Haunting and thrilling The Diviners is sure to please.

Possible Pairings: Strings Attached by Judy Blundell, Born of Illusion by Teri Brown, The Butterfly Clues by Kate Ellison, Speak Easy, Speak Love by McKelle George, Bright Young Things by Anna Godbersen, Seraphina by Rachel Hartman, Vixen by Jillian Larkin, I Hunt Killers by Barry Lyga, Sabriel by Garth Nix, Vassa in the Night by Sarah Porter, Iron Cast by Destiny Soria, The Book of Blood and Shadow by Robin Wasserman, In the Shadow of Blackbirds by Cat Winters, The Stand (mini-series)

Exclusive Bonus Content: Be sure to check out the spiffy Diviners website to see info about many of the book’s characters, the series, as well as the super creepy trailer.