June 5 through June 7 The Book Bandit and I essentially lived at the Javits Center for this year’s Book Expo America.

The three-day-trek started bright and early on Tuesday with registration and the all important bag check. Having learned that books are heavy and in large supply, I knew a rolling suitcase would be crucial this year and I have to say all three days I left with a full bag thanks to all of the fantastic books available to attendees.

The morning’s big event was a signing with Gabrielle Zevin in the autographing area though before that I was fortunate to get copies of several books that are high on my to read list including Libba Bray’s The Diviners. (At 600 plus pages I figure I’ll finish it by the pub date if I start reading soon.) After exploring the floor, it was time to meet Gabrielle Zevin who was amazing and took time to talk to every person in line. I was already crazy excited to read Because It Is My Blood but also being able to talk to Gabrielle (who remembered me and my blog) was an extra bonus for sure.

The rest of the day was spent on more lines. But for people who got tired there was a chance to grab a quick cup of coffee. 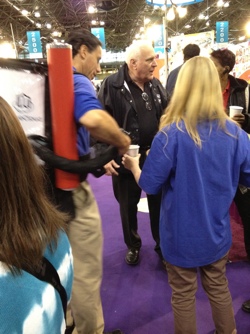 I know what you’re thinking. But you’re wrong. Coffee backpacks are a brilliant idea.

Other Tuesday highlights: Getting a copy of The Raven Boys and Shannon Hale’s sequel to Princess Academy. I forget which line we were on together but I also met Tirzah from The Compulsive Reader which was delightful.

Wednesday once again started bright and early with more exploring the floor and lining up for authors in the autographing area. The highlight here was without a doubt meeting Susane Colasanti again after interviewing her here on the blog not only because she remembered (for some reason I never think authors will remember me) but also because I got the chance to be one of those chatty people who hold up a signing line. It’s terrible when you’re the one being delayed but it’s kind of rad to be the one getting to chat with a favorite author.

But that was at the end of the day. Before that, there was a lot of other excitement. (And a lot of other lines. Like an insane amount of lines. Bea 2012 could have been renamed Waiting in Line 2012.)

One of the most interesting, and often dismaying, things about this year’s BEA was how many debut authors had huge lines for their signings. It was fantastic to see even when it meant being kicked off a line that ran out of books or ran too long. I love the amount of excitement I always see for books at BEA.

After unsuccessfully navigating Sarah J. Maas’ line, we went to wait to meet Tim Gunn. I’ve never seen Project Runway but Nicole (and her dad!) are big fans so it was a must. Seeing Tim Gunn was fun but it was also nice to talk to some of the other people on the line and tag team exploring the floor while we creeped ever closer to Tim. I have a picture but I’m not going to share it. Because it’s awful. Unlike The Book Bandit, I did not make it work in my picture.

I also have to give a shout out to the people at the Macmillan booth who were kind enough to give me a copy of Crewel even though I didn’t get a ticket for the giveaway. I’m really excited to read it. (In fact, I’m so excited about so many books that I’m having a hard time deciding what to read next. There are so many good books!)

After Tim Gunn’s line the line at Penguin to see Marie Lu was surprisingly mellow. Again, there were some great people to talk to on the line and thanks to the magic of Twitter I even discovered that Marie Lu and I have a friend in common. Go figure! Waiting on the ticketed line for Prodigy (which is just as gorgeously designed as Legend!) I had to laugh at how easy it was to get a copy of Legend last year. Who could have guessed? This year’s signing was even ticketed.

The cover is exactly like this and the interior is just as gorgeously designed as Legend!

In case you hadn’t guessed, Wednesday’s theme was running from line to line.

The next big one–possibly also the defining moment of BEA–was Diana Peterfreund’s signing in the autographing area. Diana Peterfreund was only scheduled to sign for a half hour and her line was massive. As the line grew and grew other attendees asked who we were all waiting for. It was interesting to hear all the different pronunciations for “Peterfreund” as well as all the blank stares when anyone explained the book she was signing was For Darkness Shows the Stars. I’ve been hearing about this book for so long that I actually thought it was already long published instead of out on June 12.

Moving forward in the line, Nicole and I had a chance to talk with two delightful bloggers, Cecelia of Adventures of Cecelia Bedelia (best blog name ever) and Amy of Tripping Over Books (prettiest business card!–also we are blog theme twins right now–win!). A riot almost started when the line was moved but then we learned it was because Diana was staying longer than her half hour slot to meet everyone.

With the line being huge and slow-moving, we offered to hold Amy’s place while she went to try and meet Gennifer Albin and get a signed copy of Crewel. So of course, the line started moving after that. Things got a big stressful as books were counted to determine who could stay on the line and I’m sad to say some people were turned away but at the same time super happy to say everyone in my group did get a copy. (Unsurprisingly after that epic line I suspect almost everyone got their copy personalized. I know you’ll have to pry mine out of my cold, dead hands.) Aside from bonding with everyone on the line, I was super impressed by how gracious and generally nice Diana Peterfreund was through the whole signing. I also have to give props to all of the BEA volunteers who did an amazing job making sure everything ran smoothly. They’re really the rock stars of BEA.

After Diana Peterfreund’s line, Nicole and I knew not to fool around for Susane Colasanti so we got on line WAY early and tag teamed to explore the floor and catch other signings including Raina Telgemeir and Patrick McDonnell. I also was ecstatic to finally be in the same place at the same time with Kate Ellison to get a signed copy of The Butterfly Clues.

I’ve already mentioned how awesome it was to see Susane Colasanti (it’s kind of always awesome to see her) and end the day on a high note.

Did I mention this happened? It totally happened.

To make things even better Nicole and I managed to be at the Scholastic booth in time to get copies of The Raven Boys and The Dark Unwinding. Even better, the author Sharon Cameron was there at the same time and did an impromptu signing for us. (The book’s editor, Lisa Ann Sandell, was also there which gave me a fun chance to make a fool of myself in front of her. Good times.)

Leaving BEA on Wednesday was also filled with interesting moments. My favorite, possibly because Nicole and I had such different reactions, was when I discovered pigeons wandering the Javits Center food court. While not perhaps hygienic, I thought it was enchanting and enjoyed the whimsy of the whole thing. Nicole . . . did not.

Don’t let the pigeon sit in the food court.

It also took an incredibly long time to get home on Wednesday thanks to leaving during rush hour. While wandering the streets looking for a cab with a suitcase bursting with books was not ideal I did get to snap some nice pictures of the skyline. 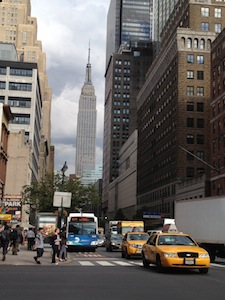 Which brings us to Thursday and another early start. There were two really big reasons I knew I had to be at BEA on Thursday. The first was because Alexandra Bracken was signing. I adored Beautifully Woven and love following her on Twitter. I’ve been following news on her forthcoming book The Darkest Minds since before it had that title. After exploring the floor we made our way to Alex Bracken’s line to secure our spots.

Victory! This was my first BEA read and it was SO. Good. I am already eagerly waiting for the sequel and this one isn’t even out until December!

After that the rest of the day became an exercise in line hopping as we met Eliot Schrefer, Jeff Hirsch, Jenny Han and Siobhan Vivian, and Jackson Pearce (who has a lovely signature).

Jackson Pearce tearing it up with her pretty (fast) signature.

Eliot Schrefer and Jeff Hirsh shared a signing table. They’re two of the most unfailingly pleasant and nice authors at signings. 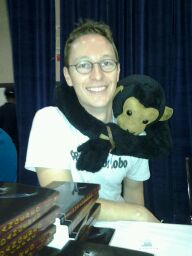 In addition to being unfailingly pleasant and funny, Eliot Schrefer came to his signing with a (relevant) stuffed monkey. Nicole took a picture up close.

Kristin Cashore was also signing during this slot and Nicole and I decided it was worth a shot though after the last few days (see: Diana Peterfreund and Sarah Maas’ lines) our expectations were low. Amazingly, Kristin Cashore must have some kind of signing magic because not only did the line move, it moved quickly and we both managed to meet her. 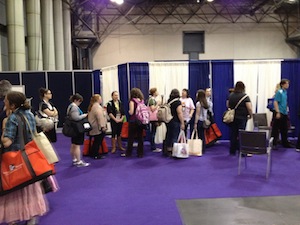 After her line we even had an impromptu meeting (complete with hugs) with Victoria Schwab.

Then we come to the second reason I knew I had to go to BEA on Thursday: Tessa Gratton, Maggie Stiefvater and Brenna Yovanoff would all be together signing their new short story collection The Curiosities. The line was, say it with me, very long. But once again there were some other wonderful bloggers to share the waiting with. Rebecca from Booksellers Without Borders, Lisa from Lisa Loves Literature, and Jenna from Coffee, Books, and Me (who came all the way from the Philippines).

All three authors were delightful and had the three-person signing thing down pat. I haven’t had a chance to do more than glance at my copy but from what I’ve seen so far it was definitely worth the wait in line.

Having had last year to “practice” Nicole and I were way more prepared (and trained perhaps?!) for this year’s Book Expo and I am thrilled with all of the great book finds I have to review and share with you guys later. It’s going to be awesome!

And that, dear readers, is what BEA 2012 looked like for me.

This is what my desk looked like after BEA 2012 (my laptop is somewhere under all of that) which goes a long way to explain why writing up this recap took so long.