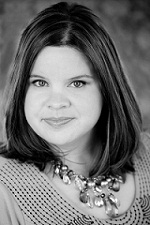 Jill Hathaway‘s debut novel Slide came out earlier this year. This mystery with a hint of the supernatural and a dash of romance with some snark to taste blew me away.

Ms. Hathaway is here today to talk about her debut novel and answer some of my questions.

Jill Hathaway (JH):  I’ve always enjoyed writing, but I didn’t really become serious about it until a few years ago during NaNoWriMo. I decided to take the leap and query agents. I didn’t land an agent with my first (terrible) book, but I had interest from several agents with Slide. That’s when I knew I was onto something good! :)

MP: What was the inspiration for Slide?

JH: I wanted my protagonist to find herself standing over a dead body with no idea of how she ended up there. From there, I came up with the mechanism for sliding, which is the process through which Vee gets into other people’s heads and sees the world through their eyes.

JH:  I did some research online, but the thing is… Vee isn’t really narcoleptic. That’s just her excuse for what’s happening to her. As I understand it, narcoleptics actually fall asleep for very brief periods of time, and it’s not really like what happens to Vee.

MP: In addition to being a writer, you are a teacher. Did your own teaching experiences influence your vision for the high school in Slide or for the classroom scenes during the novel?

Since I’m in the world of high school every day, I’m sure my experiences filtered into the book somewhat. I had a former student comment on the thermostat that wasn’t working because I’ve had the same problem in my classroom. :D

MP: Since Slide is essentially a mystery there is a necessary suspense throughout the story as clues are uncovered. As a writer, how did you go about pacing this aspect of the story and deciding what to reveal when?

JH:  When I wrote the rough draft, I just threw in a bunch of stuff I thought would be cool. But during the revision process, I really had to sort out which clues to put where and which red herrings to put in. I’m trying to be smarter about writing my next book and plan all the clues before I even start writing. ;)

MP: Rollins is Vee’s best friend. He also makes his own zine. According to your website bio you too made your own zines. Are Rollins’ zines similar to your own?

JH:  Ha, I think they are about as cynical as my zines were. Like Rollins, I was very idealistic and indignant of any perceived hypocrisy around me. I also included interviews with bands and awful poetry.

MP: Vee’s father often cooks for Vee and Mattie to offer comfort. All of the food described in the book sounded delicious. How did you decide which dishes would be significant to the Bell family?

JH:  Ha, I think I wrote about whatever I was hungry for at the time. So my longing for the foods probably came through in the writing.

MP: To feel closer to her mother Vee listens to her mother’s music from the 1990s. Nirvana, the Gin Blossoms, Pearl Jam and The Smashing Pumpkins are some of the bands you mention in the story. How did you decide what songs to include in the novel?

JH:  A lot of bloggers and reviewers have commented that I obviously used music that I enjoyed when I was a teen, and that is very true. I was into “alternative” rock, and the songs I mention in the book are the songs I rocked out to when I was sixteen. In that way, I kind of pictured myself as Vee’s mom. I wonder if someday my daughter will read the book and listen to the same songs and think of me the way Vee does (but hopefully I won’t be dead at that point :P).

MP: Do you have a playlist for Slide? If so, do any of the songs mentioned in the book feature on the playlist?

JH: Yes, there’s a lot of Smashing Pumpkins and Pearl Jam on the Slide playlist. “Glycerine” by Bush is another song I listened to when I was writing the scenes with Vee and Zane, but I don’t think I mentioned it anywhere in the book. (Hint: I listened to “Everlong” by Green Day a lot while writing the sequel, IMPOSTOR!)

JH: IMPOSTOR, the sequel to SLIDE, will come out in spring 2013. In the book, Vee starts blacking out and realizing she’s been doing strange, dangerous things while she was unconscious. She eventually realizes that someone’s been sliding into her and wonders if the other slider is using her to do their dirty work.

Thanks again to Jill Hathaway for taking the time to answer my questions. You can find more information about her books on her website.

If you want to read more about Slide check out my review!