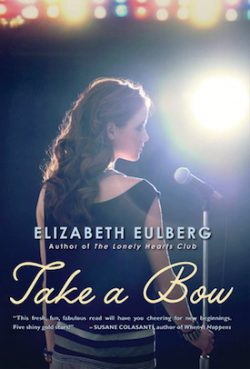 Emme’s never been comfortable in the spotlight. Not that she has to be as a song writer. She’s fine writing songs and having her best friend Sophie sing them while Emme stays in the background. Except Sophie might not be the friend Emme thought she was. And being in the background might not be enough to get Emme what she wants anymore.

Sophie knows she is destined to be a star. Sure, her path to stardom hasn’t gone exactly to plan since she arrived at the New York City High School of the Creative and Performing Arts. But senior year is just starting and she still has time to make a statement. If that means exploiting her best friend Emme and riding on her trophy boyfriend Carter’s famous coattails, so be it.

Carter has been playing parts for his entire life. Next It actor. Former Child Star. Soap Opera Actor. Big Ticket Attraction at CPA school performances. Now that senior year is here Carter realizes it might be time to stop acting and start living. Even if he isn’t totally sure where that road will lead.

Ethan never worries about performances or auditions. Music is the one thing Ethan knows he is good at even when he manages to ruin everything else–especially relationships. Ethan knows having Emme as a friend makes him a better person. He knows he needs her in his life. What he doesn’t know is how to convince Emme that she needs him.

With their time at CPA coming to an end Emme, Sophie, Carter and Ethan are all looking to leave their mark–or at least find their way. At a school where everyone is talented and everyone wants to be famous, these four are going to find out exactly what it takes to shine in Take a Bow (2012) by Elizabeth Eulberg.

Take a Bow is Eulberg’s third novel and perhaps her most ambitious to date. It is also possibly my favorite so far.

This novel has four first person narrators. Chapters rotate between Emme, Sophie, Carter and Ethan throughout the novel with Emme and Ethan taking up the bulk of the chapters as the plot progresses. With a variety of voices and techniques (Carter’s chapters read like scenes written in a screenplay) Eulberg expertly juggles all four characters making sure they each stand out.

Set in a specialized New York City high school, Eulberg captures the unique stress and frenzy of both getting into and staying in a competitive high school. Being grounded in the school and New York City, Eulberg also writes a well-rounded look at the work and passion it takes to be a performer. Sophie’s desperation is especially palpable and sympathetic even when she is at her worst.

Really, though, the star of the book is Emme. Having her narration and also seeing how the other characters perceive her, Eulberg does a phenomenal job showing Emme’s transformation as she moves from the background to the spotlight.While all of the characters ring true, Emme will strike a chord with anyone who is waiting for (or has already found) the way to be the star of their own life. Her fears and hang ups are believable as is her shift as she realizes it’s time to make a change.

Filled with its fair share of drama, romance, and of course music, Take a Bow is definitely a book that will have readers singing its praises.

Possible Pairings: When It Happens by Susane Colasanti, A Little Wanting Song by Cath Crowley, Where She Went by Gayle Forman, Undercover by Beth Kephart, Fly on the Wall by E. Lockhart, Open Road Summer by Emery Lord, Being Friends With Boys by Terra Elan McVoy, A Map of the Known World by Lisa Ann Sandell, The Unwritten Rule by Elizabeth Scott

You can also read my exclusive interview with Elizabeth Eulberg!