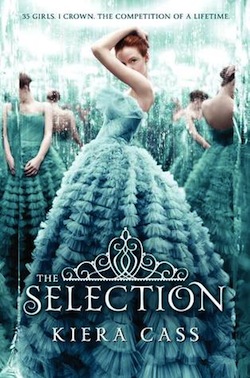 At seventeen years of age, America Singer already knows exactly what life she wants. She also knows, without doubt, that taking part in the Selection will do nothing to help her get that life. While every other girl in her province dreams of being chosen as one of the girls to compete for Prince Maxon’s affections and the chance to be Illea’s next princess, America is desperate to avoid the Selection altogether.

But with her mother desperate for America to have a chance at becoming a One instead of a lowly Five and her boyfriend insisting she will regret not entering on his account, America’s own wishes go overlooked. Worse, America’s hope of the Selection passing her by proves impossible when America is chosen as one of the lucky girls Prince Maxon will be courting while the entire country watches.

At the castle, it isn’t as easy for America to remember exactly what she wants. In her new surroundings she finds unexpected friends and a life she never dared to imagine. Circumstances beyond America’s control brought her to this point. Now, America will have to decide for herself whether or not she wants to stay in The Selection (2012) by Kiera Cass.

The Selection is the first book in a trilogy. It is also already being adapted into a television series.

Cass brings together the unlikely elements of a dystopian setting and a Cinderella-like fairy tale story in this delightful story. America’s narration is frank and candid providing excellent details about Illea’s past and its rigid caste system as well as more personal details about her family and the Selection itself.

Superficially The Selection is a story with a love triangle and beautiful settings. However its artfully developed characters and a compelling world built with just enough details to pique interest and make way for lots of revelations later in the trilogy, The Selection becomes a novel with more depth.

Well-paced and immediately engrossing, The Selection has already gotten its fair share of buzz. With its clever world and appealing characters,The Selection is also a would-be fairy also with some definite staying power.*

*And a really neat cover that, for me, really captured America.

Possible Pairings: Crewel by Gennifer Albin, Red Queen by Victoria Aveyard, Pride and Prejudice by Jane Austen, Catching Fire by Suzanne Collins, Wither by Lauren DeStefano, The Jewel by Amy Ewing, Once Upon a Broken Heart by Stephanie Garber, Princess of the Midnight Ball by Jessica Day George, Princess Academy by Shannon Hale, Legend by Marie Lu, Cinder by Marissa Meyer, Divergent by Veronica Roth, Bring Me Their Hearts by Sara Wolf, The Bachelor

Exclusive Bonus Content: I felt a bit strange compiling the “possible pairings” for this one since it felt like I was just throwing every recent dystopian at it that I could think of and waiting to see what stuck. But, truly, I think the pairings work. This is a great read for anyone who loved how Catching Fire focused on what happens after a Tribute wins the Hunger Games. It’s as much a Cinderella story as Cinder. The caste system is very similar to Divergent’s factions. Hopefully you get my point. And it is definitely, strikingly appropriate for readers who want a read alike for Princess Academy but with older characters.