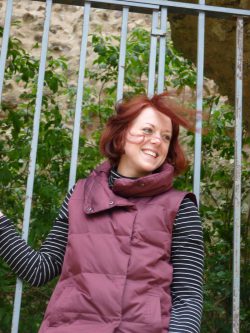 Victoria Schwab‘s debut novel The Near Witch came out last year. Though I read it last November, I find myself returning to it often remembering the beautiful writing and dramatic story. Ms. Schwab is here today to answer some questions and talk about her atmospheric story of witches and strangers.

Victoria Schwab (VS): I grew up writing poetry, and then about a year into university, decided to try my hand at short fiction. A year after that, I wrote my first novel, which was sent out to agents, and promptly rejected (and very rightly so). I sat with the book for a year, figuring out what was broken, then revised, and sent it out again, and signed with my first agent a week later.

That book broke my heart, because it went on sub and got to acquisitions three or four times over the course of eight months, but never sold. Finally, for my own sanity more than anything, I sat down to write a new book. I was a second-semester senior with a killer course load, and I could only spare two hours in the evening at a coffee shop. But I did. I went every night, and that’s how The Near Witch was born. It sold the summer after I graduated university, to one of my dream houses, and I’ve been writing since.

MP: What was the inspiration for The Near Witch?

VS: I’ve always loved fairy tales, but at university, I became fascinated by their structure and their archetypes. As I expanded my studies into folklore and the nature of narrative, the way stories are told, the way culture spreads, I wanted to write my own.

Something that had always fascinated me was fairy tale’s lack of setting. The fact that place was so sparsely sketched helped keep the stories timeless, but I wanted to build a new fairy tale in which the setting was a character, in which it was vital to the narrative. I loved the challenge of it, and the challenge of building not only a story, but a world, a village of people with their own myths and legends and fears.

And I wanted it to be about witches, because of all the supernatural types out there, witches are not only the most flexible in the forms they take, but they have an inherent tie to nature, and I knew if I was going to make the natural world a part of the story, then witches would be the world’s living counterpart.

So it was really a tangle of things that led to The Near Witch. But I’ve discovered that’s how I work. A dozen threads that interest me, and somewhere in their midst, a knot.

MP: In your biography on your website you mention your love of fairy tale and folklore. Do you have any favorite stories? Did any stories influence The Near Witch?

VS: No specific story influenced The Near Witch, actually. I was driven on by the nature of fairy tale itself, its structure more than any actual tale.

MP: The Near Witch has a very strong atmosphere in the town of Near. Did any real locations help you conjure the landscape Lexi calls home?

VS: Near is based largely on the moors of northern England. If anything, I took that classic green and gray setting, and distorted it to fit the fairy tale, compressed the hills and stretched the woods, and made it mine.

MP: One of the interesting aspects of this book is that is has a story within the story. The book begins with Lexi reading the story of the Near Witch to her younger sister Wren. This structure begs the question, which story came first during your writing: Lexi’s story or the tale of the Near Witch?

VS: The story of the Near Witch herself actually came first. In keeping with the tangled nature of this story’s evolution, NEAR as a town is actually the part that came first. I sat down to build the world. And then I wrote the stories that filled that world, and then I wrote the people who told those stories. It was a bit backwards, I know, but it helped me figure out why the inhabitants of Near were the way they were.

MP: A big part of this novel is the mystery surrounding the actual Near Witch and the disappearances in town. Readers discover clues and put pieces together along with Lexi throughout the novel. As a writer, how did you go about pacing this aspect of the story and deciding what to reveal when?

VS: IT IS HARD. It’s hard because I KNOW all the secrets, so it’s hard for me to tell when the reader should know them. This is why, in every round of revision, I pick a beta reader who’s never read a draft before. Fresh eyes become KEY. But I will also say that over the course of writing and revising the book I learned more and more the FEEL of the reveal. So much of it is feel, not formula. And when I sat down to write THE ARCHIVED, which also has an element of mystery, I had a better notion of what to do. Fresh eyes are still invaluable, though. I’m lucky because my editor has the gift of voluntary short term memory, so she can look at every draft with much, much fresher eyes than I do.

MP: Since your book features witches, I’m obligated to ask your opinion on the age-old debate: Witches vs. Vampires.

VS: BOTH. Seriously though, that’s a mean question, because witches and vampires are my two favorite paranormal entities. The reason I chose to WRITE the former, however, was their flexibility. Vampires have a pretty set mythology, but witches can take so many shapes, and in the case of The Near Witch, I was able to really build my own variety of witch from scratch. So I will have to go with WITCHES.

MP: Your next book The Archived is set to come out from Disney Hyperion in 2013. Can you tell us anything about it?

VS: Ahhhhh I cannot wait until I’m able to talk more about this book! It has lived in me for so long now, and just the thought that soon people will be able to read it is absolutely thrilling. It comes out in January, so every time we reach a new month, I do a little dance because we’re getting closer. I think the only thing I can really say about it right now is that it’s got a little Buffy, and a little The Shining. In a library.

VS: The best advice I can possibly give is to be brave. The road to publication is scary and filled with rejection, but at every step your want has to outweigh your fear. Not indignation, mind you, or entitlement, but WANT. If it doesn’t, you’re not ready yet. Be very honest with yourself. And be brave.

Thanks again to Victoria Schwab for taking the time to answer my questions!

If you want to read more about The Near Witch check out my review!