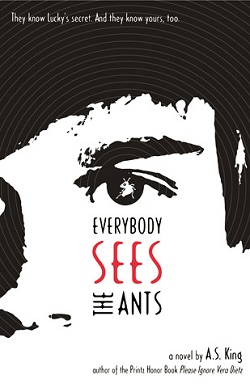 There are some things you need to know about Lucky Linderman.

First: His mother is a squid. She swims more than two hundred laps every day. No matter what. Even when Lucky has some new bruises courtesy of Nader McMillan or her husband once again flakes on his familial duties.

Second: His father is a turtle. Lucky’s grandfather never came home from Vietnam and Lucky’s dad never recovered. He spends all of his time hiding in his shell or working at the restaurant instead of actually being a father.

Third: Lucky doesn’t smile. Ever. Not since asking one stupid question for one stupid project in Social Studies (the class actually isn’t stupid–Lucky kind of likes it). He is definitely not going to smile since that one stupid question brought him nothing but trouble and the renewed hatred of Nader McMillan.

Fourth: Ever since Lucky was seven he’s been having strange dreams. Now the dreams are his only refuge as he spends each night in the war-torn jungles of Laos trying to finally bring his grandfather home from the war he could never leave.

But even dreams that seem as real as Lucky’s can only last so long before it’s time to really wake up in Everybody Sees the Ants by A. S. King.

Everybody Sees the Ants is King’s follow-up to her Printz Honor book Please Ignore Vera Dietz. It was also a finalist for the 2011 Cybils in Young Adult Fiction which is how I came to read it.

There are certain books that I enjoy upon first reading them. But the more I think about them, the more I really look at all of the little details, the more problems I have. Everybody Sees the Ants was that kind of book.

While not actually a mystery, Everybody Sees the Ants is structured in such a way that readers do not initially get a linear story nor do they get the full story. Anyone looking for a puzzle to put together will enjoy the multiple angles of this book. Lucky is a shockingly authentic* narrator with a voice and story all his own. King’s writing is painfully intense and quirky as Lucky drags readers through dense Laos jungle and the even deeper problems of his own life.

Unfortunately these strengths are not complemented by the book’s plot which is filled with numerous holes and seemingly random details that added little to the plot itself. Without delving into specifics, King never fully explains the nature of Lucky’s dreams which creates a fundamental problem with the structure of the book. Similarly, readers never really understand why one teenaged boy is able to not only bully but literally terrorize an entire town with absolutely no intervention from any adults or the authorities.** Other moments were easily predicted or simply heavy-handed as King was at pains to make certain points about Lucky’s relationships with his parents and the world at large.

If you aren’t looking for a book that needs to answer all of your questions or stand up to a close reading, Everybody Sees the Ants might still appeal.

*Unlike me, you probably already knew that King was a female author. I didn’t know that while reading the book and was completely floored to find out A. S. King was not a man. That’s how authentic Lucky’s voice is in this story.

**I maintain my stance that Nader should have been institutionalized as a psychopath long before the events of this book started.

Possible Pairings: Leverage by Joshua C. Cohen, Liar by Justine Larbalestier, The Astonishing Adventures of Fanboy and Goth Girl by Barry Lyga, The Piper’s Son by Melina Marchetta, A Trick of the Light by Lois Metzger, The Things They Carried by Tim O’Brien, This is Not a Test by Courtney Summers

Exclusive Bonus Content: One of the biggest problems I had reading this book is one most readers will not have. Fantastical things happen to lucky throughout the course of the story. These things are called elements of magical realism but, for me, they pushed the book firmly into the fantasy genre. While judging this book as a potential winner in the Cybils’ YA Fiction category, that became a problem for me. I struggled with whether something fantastical was really happening or if Lucky was just delusional. Because if Lucky is really that delusional, how can a reader believe anything else he says? If you expect an answer to that kind of question this is not the book for you.