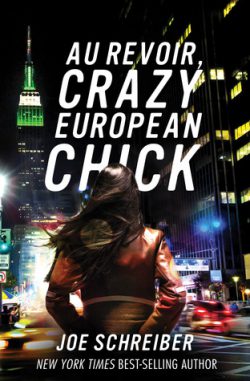 Perry Stormaire had no intention whatsoever of attending his senior prom. Not when his band had their first ever actual gig in an actual club in New York City.

Unfortunately his parents have other ideas when the foreign exchange student staying with Perry’s family expresses her wish to attend prom before going home to Lithuania.

Why Gobija Zaksauskas wants to attend prom is anyone’s guess. Frumpy, quiet, not to mention epileptic it seems like Gobi’s entire mission as a foreign exchange student was to blend into the background.

All of that changes on prom night.

As Gobi embarks on a night-long mission of vengeance, Perry is dragged along–sometimes literally–for the ride. A week ago Perry’s biggest problems were choosing a college and working up the nerve to defy his father. Now, Perry isn’t even sure if he’ll make it through his prom night in one piece in Au Revoir, Crazy European Chick (2011) by Joe Schreiber.

Though completely improbable and often needing a lot of suspension of disbelief, Au Revoir, Crazy European Chick remains a fast exciting read of pure escapism with refreshing humor and oddly authentic characters for such an outlandish story.

Schreiber has created a fun blend of unlikely adventure and the more usual coming-of-age story. Structured with college essay question at the start of each chapter, Au Revoir, Crazy European Chick perfectly captures the panic and scrambling so often associated with the college search and application process.