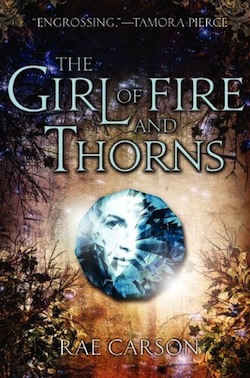 Sixteen-year-old Elisa barely feels like a princess, much less the latest bearer of a Godstone–a sacred and powerful stone in her navel that marks Elisa as one chosen for a specific and probably dangerous act of Service. Her graceful, clever sister would make a much better bearer, she is certainly the better princess.

Why is it, then, that Elisa is the one being whisked off in a secret wedding to a neighboring king?

Caught up in the intricacies of noble life, secretly married to a man she barely knows, Elisa soon finds herself at the center of a revolution that will change her world forever in The Girl of Fire and Thorns (2011) by Rae Carson.

The Girl of Fire and Thorns is Carson’s first novel. It is also the first in a trilogy.

Carson has created a rich, vibrant world with a complex history and an even better realized faith system. With its desert climate and Spanish influences, The Girl of Fire and Thorns is an original fantasy with a climate, culture and background not often seen in traditional fantasies.

Elisa is a fiery and astute heroine who, throughout the course of the book, learns that it takes more than outward appearances to create a strong leader as Elisa moves from a privileged princess to fierce fighter.*

While the story starts in the vein of palace intrigue and court politics, the focus soon changes almost abruptly to a more action-packed journey through a harsh desert landscape as Elisa helps turn a rag tag group of refugees into revolutionaries. Then, again somewhat abruptly, the last third of the book shifts again to court politics. Aside from the sharp changes in focus, Carson rains down twists and turns galore.**

While Elisa is not always the cleverest with clues, especially later in the novel, she is a fun heroine who is grounded and very authentic throughout her journey. The Girl of Fire and Thorns is an original fantasy that will appeal to anyone looking for a pure fantasy in a unique, well-realized world.

Possible Pairings: The Wrath and the Dawn by Renee Ahdieh, The Candle and the Flame by Nafiza Azad, Nemesis by Anna Banks, The Scorpion Rules by Erin Bow, Graceling by Kristin Cashore, The Star-Touched Queen by Roshani Chokshi, Vessel by Sarah Beth Durst, Reign the Earth by A. C. Gaughen, Unearthly by Cynthia Hand, Cruel Beauty by Rosamund Hodge, Princess of Thorns by Stacey Jay, Castle in the Air by Diana Wynne Jones, Grave Mercy by Robin LaFevers, The Outlaws of Sherwood by Robin McKinley, Snow Like Ashes by Sara Raasch, The Sin Eater’s Daughter by Melinda Salisbury, A Conspiracy of Kings by Megan Whalen Turner, Fable by Adrienne Young

*I didn’t love the correlation between Elisa losing wait and gaining confidence. Her journey was great and realistic but it bugged me that she only really came into herself when she slimmed down though I might be reading too much into the whole thing. Either way, that issue does little to detract from Elisa’s numerous positive qualities as a heroine.

**This includes the treatment of some secondary characters. While some got a very cursory treatment–to the point that I wondered about their presence in the story–others were very well-developed to the point that one can only hope they will play a more prominent role in later books.