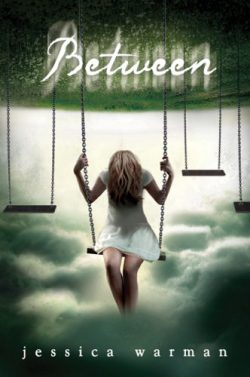 Elizabeth Valchar has the perfect life. Pretty, popular and privileged–the world is hers for the taking. Even her eighteenth birthday party is ideal: a night on her father’s boat spent with her friends, her boyfriend, alcohol and maybe just a little pot.

Unfortunately when Liz wakes up the day after her party it’s obvious that her perfect life is over in every sense of the word.

Liz is dead. Left staring over the side of the boat at her own dead body and watching the horrible fallout as news of her death spreads to her family and friends, Liz has no clear memory of how she died. She doesn’t even remember much of her own life.

As Liz struggles to make sense of the person she used to be and what led to her drowning on her birthday, Liz realizes there are some things that are best left forgotten in Between (2011) by Jessica Warman.

Between is an uneasy blend of mystery and paranormal with the smallest dose of suspense thrown in. While the bones of the story are promising as Liz tries to decipher the events leading to her own murder, the execution was inelegant at best.

First and foremost, Liz is not a likable heroine. While she is at pains to tell readers she is a “good kid” Liz’s actions often speak louder. Even her transformation over the course of the book does little to make her an approachable narrator. Her sidekick throughout the  story remains similarly one dimensional.

While Between has some interesting aspects the writing felt repetitive as Liz explains things repeatedly at different intervals of the story in the exact same way. Other aspects of the story (particularly “Famous Richie” and why he is so famous) felt like gimmicks that added very little to the story. Combined with Liz’s often prickly narration these elements made it very hard to get into this book.

The mystery aspect was well handled but too drawn out. Warman also paints a painfully authentic picture of the havoc eating disorders can wreak but again this thread takes so long to develop that much of its potency is lost. The book was also littered with shockingly inadequate adults, adding another layer of frustration.

Fans of books about life after death, particularly The Lovely Bones, will likely find a new favorite read in Between. On the other hand, readers hoping for an eerie mystery would be better served with a different title.

Possible Pairings: Wintergirls by Laurie Halse Anderson, 13 Reasons Why by Jay Asher, Where I Belong by Gwendolyn Heasley, Fury by Elizabeth Miles, More Than This by Patrick Ness, The Lovely Bones by Alice Sebold, Memoirs of a Teenage Amnesiac by Gabrielle Zevin