You’re in your favorite bookstore, scanning the shelves. You get to the section where a favorite author’s books reside, and there, nestled in comfortably between the incredibly familiar spines, sits a red notebook.

What do you do?

The choice, I think, is obvious:

You take down the red notebook and open it.

And then you do whatever it tells you to do. 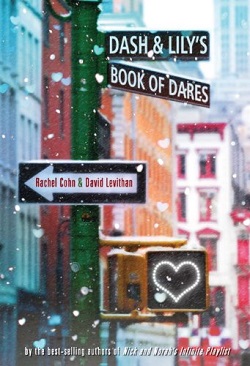 It’s Christmas in New York City and Dash wants nothing to do with it. So great is his hatred of the holiday season that Dash has conspired to spend the entire holiday alone. And he will enjoy it. Oh how he will enjoy it.

Lily, on the other hand, is horrified to find her finely tuned Christmas plans thrown out the window when the rest of her family makes better plans. Left alone with a brother eager to get rid of her, well, writing a book filled with dares for the right boy to find suddenly starts to seem like a very good idea indeed.

When Dash finds said notebook he doesn’t know what to expect. But he does know it’s not an opportunity to be missed.

Dash and Lily don’t have much in common but somehow they connect on the papers bound in that red notebook. Will these two misfits make sense in person? Only time will tell if their fledgling relationship can survive Lily’s family, Dash’s friends, some comical disasters and, of course, the holiday season in New York City in Dash and Lily’s Book of Dares (2010) by Rachel Cohn and David Levithan.

Dash and Lily’s Book of Dares is Cohn and Levithan’s third collaborative novel. Levithan wrote Dash’s chapters, Cohn wrote Lily’s. The plot was not planned ahead.

And maybe that’s part of why it works so well. Written in alternating chapters from both protagonists, Dash and Lily’s Book of Dares is a breezy, hilarious story firmly grounded both in New York City* and the holiday season.

I loved Lily and her zany Christmas-loving ways. I loved Dash’s curmudgeonly yet hopeful narration. I loved them together. And I totally want to see Collation** now.

**Don’t get the reference? After reading it you will. And believe me, you will also want to see it.

Possible Pairings: Never, Always, Sometimes by Adi Alsaid, So Much Closer by Susane Colasanti, Enchanted Ivy by Sarah Beth Durst, Girl Overboard by Justina Chen Headley, The Last Little Blue Envelope by Maureen Johnson, The Romantics by Leah Konen, Drawing the Ocean by Carolyn MacCullough, Since You’ve Been Gone by Morgan Matson, Tonight the Streets Are Ours by Leila Sales, Roomies by Sara Zarr and Tara Altebrando