**This review (and the book itself) contains MAJOR spoilers for Hex Hall. You have been warned.** 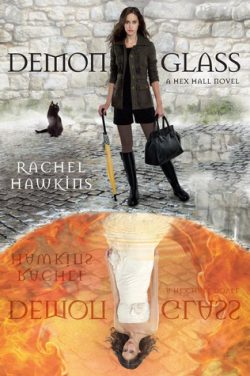 Sophie Mercer’s first year at Hex Hall is almost over and in those months everything she thought she knew was turned upside down. Now Sophie knows the truth about herself (turns out she isn’t a dark witch but a demon), her crush (undercover agent of The Eye–a group determined to kill all Prodigium including witches, shifters, fairies, and definitely demons), and the dangerous nature of her powers (being a demon could lead to, well, killing people).

All of which just convinces Sophie that she needs to go to London for the Removal, a dangerous procedure that can strip Sophie of her powers–if it doesn’t kill her.

Traveling to London with her estranged father (and head of the Council in charge of all things magic including the Removal) Sophie finally realizes knowing the truth doesn’t mean she knows everything. Turns out there’s a lot more to her family and her powers than she thought.

As if Sophie’s plate isn’t full enough she also discovers other demons in London, learns more about her crush (the one that might want to kill her), and discovers there might be more to Hex Hall’s stoic caretaker Cal than she gave him credit for. With or without the Removal Sophie’s summer is sure to be exciting (but hopefully not deadly) in Demonglass (2011) by Rachel Hawkins.

Demonglass is the sequel to Hawkin’s first novel Hex Hall.

If Hex Hall was a funny, exciting, fantasy with strong heroine then Demonglass is all of that but more.

Readers will find the same breezy narration and action-packed story along with the characters they loved from Sophie’s first adventure. At the same time Hawkins does a wonderful job expanding Sophie’s world and building on the events of the first book to create a new and original plot here. Sophie’s relationship with her father is also handled in a realistic way helping to make him a well-realized character who adds a lot to the story. Speaking of great characters, as a fan of Cal from the very beginning, I am also happy to report that he features more prominently in this installment to great effect.*

Sophie continues to be a great heroine with her sharp blend of sarcastic humor, bravery and a basic authenticity about her. Really, my only regret about this book is that it ends with the most epic cliffhanger I’ve seen since Catching Fire. Luckily the final installment in Sophie’s trilogy is slated for a 2012 release.

*Cal is now officially a part of the very exclusive Literary Guys I Wish Were Real Club.