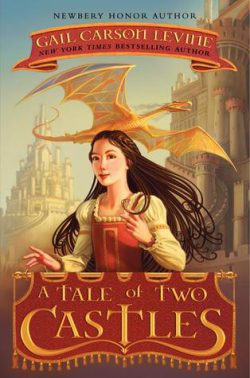 Elodie comes to the town of Two Castles with one goal: to become a mansioner. Her greatest hope, her only actual plan upon arriving in town, is to apprentice herself to a mansioner that she might become an accomplished performer in her own right.

When Elodie’s hope is dashed she is forced to look for another plan or starve in Two Castles with none of her family at home even knowing about her plight.

Help comes in the unusual form of a dragon named Meenore.

Mysteries (and cats) abound in Two Castles, which makes the town an ideal place for a dragon like Meenore to peddle ITs powers of deducing, inducing, finding missing things and missing people. Two Castles is also a fine town for a girl like Elodie to proclaim said dragon’s numerous talents and even to assist such a dragon in the solving of mysteries.

One of the castles in Two Castles belongs to the king, of course. But the other houses an ogre who might be in great danger. Or he might be preparing to devour townsfolk. One way or the other Elodie will have to help her Masteress Meenore make sense of the secrets in Two Castles. Together dragon and girl will have to induce, deduce and use common sense (and perhaps some mansioning) to separate the kind from the cruel and ultimately determine who can be trusted in A Tale of Two Castles (2011) by Gail Carson Levine.

A Tale of Two Castles is Carson Levine’s first mystery–inspired partly by the story of “The Puss in Boots.”*

With our intrepid narrator Elodie being twelve years old, the story is essentially a children’s read but Elodie is strong enough as a character and the plot is exciting enough that it can easily appeal to older readers as well.

Carson Levine creates a well-realized world in Two Castles complete with its own customs and vocabulary. (Dragons always being called IT because only a dragon knows its own gender was a particularly nice touch.) In addition to creating an exciting whodunnit of sorts, A Tale of Two Castles is a simply a funny book. Elodie is completely out of her element and watching her make her way in the strange surroundings of Two Castles makes for several good laughs and a fair bit of drama besides.

As readers of her Newbery Honor title Ella Enchanted will expect, Carson Levine includes a lot of traditional fairy tale elements here and turns them completely upside down–mysteries are everywhere and nothing it as it seems. Elodie is a delightful narrator who, though she might stumble along the way, eventually finds the truth and a place for herself in this rollicking and winsome read.

*She explained this at her event last month at Books of Wonder. She is quite a funny and charming speaker so if you ever get a chance I STRONGLY recommend going to see her in person. You won’t regret it!

Possible Pairings: Murder at Midnight by Avi, Gideon the Cutpurse (AKA The Time Travelers) by Linda Buckley-Archer, Rise of the Darklings by Paul Crilley, The Girl Who Could Not Dream by Sarah Beth Durst, The Graveyard Book by Neil Gaiman, The Marvels by Brian Selznick, Drama by Raina Telgemeier, Dealing with Dragons by Patricia C. Wrede

Exclusive Bonus Content: How great is that cover? Illustrator Greg Call did a great job capturing the look of both Elodie and Meenore. Love it.