The Dreams of Mairhe Mehan: A Novel of the Civil War by Jennifer Armstrong (1996) 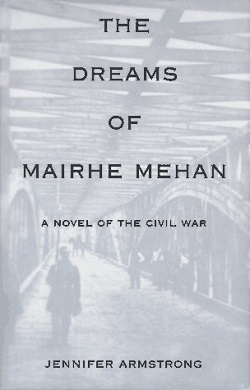 This book has been in my house begging to be read since 2004. With seven years of build up maybe it’s not a surprise that this book did not leave me dazzled. Maybe that was the only possible outcome. The story is interesting but from the outset the book had a lot working against it including a plain cover (mine has a white background with black text and . . . nothing else) and some difficult pronunciation (“Mairhe” is pronounced “Moira” and is the Irish form of “Mary” all of which I thought was made clear in the novel but someone didn’t because there is a note at the start of the book explaining all of that–which makes the whole thing feel intimidating).

At 128 pages (hardcover) I hesitate to explain much of the plot but I will say this: Armstrong does a great job if you look at this as a slice-of-life novel. Although I liked Mairhe as a heroine the entire story hinged on a character being likable and I just didn’t like him very much. It happens. Her descriptions of the Civil War battles and Washington of the time are stunning and evocative in a way few writers ever manage. The writing here is lyrical and immediately brings to mind an Irish brogue which adds to the dream-like quality of the entire book.

If anyone can even find this book anymore (NYPL no longer has it) I’d recommend it to anyone who likes historical fiction, who is interested in the Civil War, or wants a book about the immigrant experience as much of the plot hinges on what it means to be American (or Irish) in an era when America was still figuring out its identity as a country.