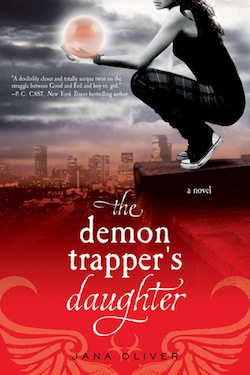 It’s 2018 and the city of Atlanta is going to Hell. The economy is in shambles, the city is practically bankrupt, and Lucifer’s demons are everywhere. Angels wander the streets but they keep a low profile and tend to stay in the background.

Demons have no such scruples. Whether it’s a Biblio, a Magpie, or one of the Geofiends there is no forgetting that things are bad and on their way to worse.

Especially for seventeen-year-old Riley Blackthorne. An apprentice demon trapper learning the ropes from her father, Riley already sticks out as the only girl apprentice in the local demon trapper’s guild. When she botches a routine trapping, that’s bad. When her father is killed and Riley is left on her own, that’s a whole lot worse.

Riley is alone in a hostile city. There are some in the guild eager to see her fail. There are some, like really cute fellow apprentice Simon Adler, who want to help. Denver Beck, her father’s trapping partner and a near constant annoyance to Riley, wants nothing more than to run her life. At least, sometimes he does. Sometimes he just wants to be nice to her. It’s confusing.

Either way, Riley doesn’t want help. She wants to get by on her own and prove herself.

In a city where the demons know your name and the old rules are changing, working alone might get Riley killed. Or worse in The Demon Trapper’s Daughter* (2011) by Jana Oliver.

There is a lot to love about The Demon Trapper’s Daughter. Jana Oliver takes the old conventions about demons and demon hunting and  turns them upside down in this dynamic start to what promises to be a thrilling series. Oliver’s world building is phenomenal. Riley and the other characters, particularly Beck, jump off  the page in an evocative story where readers will smell the brimstone and feel the swipe of every demonic claw.

The story is written in the third person and alternates between Riley and Beck’s viewpoints. The one weak point in the writing are the italicized thoughts interspersed throughout the narrative which are a bit jarring–particularly Beck’s since his are written in the vernacular to convey his Georgia accent. Riley can be a frustrating protagonist especially with her low opinion of (the obviously awesome) Denver Beck. But Beck is just as stubborn. By the end of the story the two balance out even though they might not see it that way.

*This book is also called The Demon Trappers: Forsaken–that’s the title for the UK edition. Thanks to the author, Jana G. Oliver, for commenting on the review I posted on Amazon to confirm this information! (I prefer The Demon Trapper’s Daughter as it points more to the crux of the story. Either way, this is the first book in The Demon Trappers series.)

Possible Pairings: The Demon Catchers of Milan by Kat Beyer, City of Bones by Cassandra Clare, Guardian of the Dead by Karen Healey, Rot & Ruin by Jonathan Maberry, Angelfire by Courtney Allison Moulton, The Demon’s Lexicon by Sarah Rees Brennan

Exclusive Bonus Content: Did you catch by now that I have a ridiculous literary crush on Denver Beck? Seriously, he’s awesome. I can’t even tell you how awesome he is because it gets too far into plot details but I expect him to play a BIG role in the rest of the series (and hopefully not die tragically because that would make me sad). In all seriousness (no really) Denver Beck joins Tom Imura, Alan Ryves and Tucker Avery in the very exclusive Literary Guys I Wish Were Real Club.

Also, if I had a club for Book Covers I Love this one would definitely be in it. I think it not only captures the essence of the book but also the essence of Riley as a character in a weird way. I read this book as an arc so, tragically, I do not have information on the who designed this delightful cover.