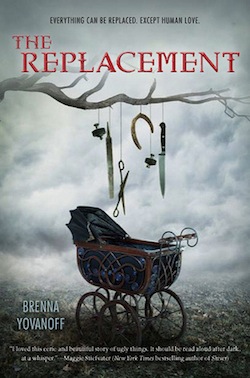 Mackie Doyle doesn’t remember any of the true, important parts. But his older sister Emma does. She remembers getting out of bed one night and looking into her brother’s crib only to find something else inside. It tried to bite her but still she stayed watching.

The thing watched back.

Sixteen years later, the thing would be called Mackie Doyle.

Sixteen years is a long time to live in a place that’s slowly killing you.

Allergic to iron and blood, unable to step on consecrated ground, Mackie should have died years ago when he was first traded for that human child in the small town of Gentry. He’s dying slowly right now.

No one wants to talk about the strange things that happen in Gentry. Not Mackie’s best friend Roswell, not his parents, not even Emma.

No one except Tate Stewart.

Tate wants answers about her sister’s death. After years of trying to be invisible, all Mackie wants is to be left alone to play his bass and forget his troubles. But Mackie is dying and if he’s willing to look at the ugly things that lurk beneath Gentry he might be able to find some answers about Tate’s sister and about his own place in Gentry in The Replacement (2010) by Brenna Yovanoff.

Atmospheric and sometimes horrible, The Replacement is a story about monsters and things that come out after dark. It is also a story of fierce affection where even monsters can find a place and, perhaps, earn redemption. Yovanoff’s writing is haunting and strangely enchanting. Mackie is an unlikely hero but one that will charm readers with his breezy style and honesty.

Everyone can tell you about how this book sets itself apart as a horror story. A lot of people will mention how cleverly Yovanoff interprets the changeling folklore in her debut novel. But what I really want to underscore is how much this story is about the power of love and friendship (even if the deliciously creepy cover with illustration by Jonathan Barkat and design by Natalie C. Sousa might suggest otherwise).

The Replacement is a fantastic fantasy that is sure to be going places. Definitely one to watch (and one of my favorites) from 2010.