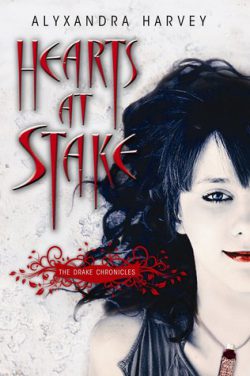 Being a teenager is hard enough, but Solange Drake has a whole other set of problems. With her sixteenth birthday fast approaching, Solange and her family have way more on their mind than her Sweet Sixteen–like planning for her transformation into a vampire. All of the Drake sons survived the transformation in one piece, but being the first female-born vampire in 800 years (and the future vampire queen according to a mysterious prophecy) no one is really sure how Solange will fair. Of course, that might be irrelevant if the vampire hunting Helios-Ra or the followers of the current queen kill Solange for the bounty on her head first in Hearts at Stake (2009) by Alyxandra Harvey.

It’s a hard lesson to learn, but just because a person likes Buffy it does not mean that she will like every snarky, girl power-esque vampire story that comes along. Such is the case with Hearts at Stake. Even before coming to that painful realization about myself, I knew I might be in for trouble with this book when I read that the author was sometimes belly dancer who owns a hawk. Say what you will, but I had a bad feeling.

There are two fundamental problems with the story. The first is that everything feels a bit contrived– even given the fact that it is part of a necessarily contrived genre what with vampires not existing. Solange is at the center of this huge prophecy, the figure who might end a massive civil war among the different vampire tribes, and she belongs to one of the oldest vampire families in the world. None of which is set up for the reader. Instead Solange tells readers as much in a passing paragraph or two which interrupts the story at hand and does little to explain any of these events.

The second problem is that Hearts at Stake seems to be a book at war with itself. The book’s narration is split between Solange and her human best friend Lucy. The story also eventually splits into a dual romance. This symmetry seems forced leading to a rather heavy-handed treatment in some of the romantic matters. The tone of the story is understandably erratic as a result. The story alternates in rapid succession between steamy kisses, deadly fights, and conversations filled with girl power bravado and snark.

Even though both girls were at pains to remind readers and other characters that they were strong and could take care of themselves, it felt unconvincing because there is a difference between saying you can take care of yourself and actually doing so. Hearts at Stake will appeal to many readers for a quick vampire romance fix, but readers looking for a book with more substance would do well to look elsewhere.