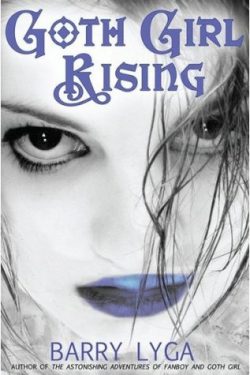 Time is a funny thing in the hospital. Especially in the mental ward. You lose track of it easily. When Kyra, otherwise known as Goth Girl, is finally released from the Maryland Mental Health Unit after six long months, she is ready to pick up right where she left off.

She’s ready to make up with Fanboy and continue helping him with his graphic novel. He might have been a jerk and it might have been his fault that she got committed again. But Fanboy might be the only person who really understands her just as she is, and that’s worth something.

Except a lot can change in six months. Especially outside of the mental ward. When Kyra returns to Brookdale she expects everything to be the same. But nothing is.

Her goth friends Simone and Jecca don’t seem quite so interesting. Roger isn’t the standoffish father he once was. And Fanboy, well, he isn’t Fanboy anymore.

Suddenly popular and self-assured, Fanboy has become someone Goth Girl doesn’t recognize. Someone who doesn’t even need her. Someone who forgot her.

All of Kyra’s plans for a grudging reconciliation with Fanboy are soon replaced by frustration, and only one acceptable course of action–to destroy him and all of her other enemies in Goth Girl Rising (2009) by Barry Lyga.

Goth Girl is a complex character whose story was largely up in the air at the end of this book’s prequel The Astonishing Adventures of Fanboy and Goth Girl. In addition to explaining what happened to Kyra between books, Lyga provides a window into Kyra’s world by narrating Goth Girl Rising in her voice.

Unfortunately,  the peripheral characters in this story are not as well-developed. Simone and Jecca especially are not as complex, appearing, by the end of the story, to be more like annoying nuisances than Kyra’s best friends.The homoerotic subplot between Jecca and Kyra is also problematic not so much because it’s in the book as because it is so scattered and does little to add to the plot or even the character development.

Fanboy and Goth Girl are both, in their own ways, comic book geeks. This book is rife with references to Neil Gaiman’s “Sandman” series but instead of adding to the story these references feel more like a crutch device filling the pages of this story with explanations of different aspect of Gaiman’s work.

Lyga does still manage to tackle some heavy themes effectively here. Kyra’s narrative voice rings true as talks through her depression and suicidal thoughts. By the end of Goth Girl Rising readers will understand what Kyra has been through even if they can’t quite grasp her rage.

Really, the main problem with this book is that there was not enough Fanboy. Having read about and loved that charming comic geek before, it was disappointing to find him in a relatively small part of Goth Girl Rising as seeing Goth Girl and Fanboy reunited was one of the best parts of this novel.

Possible Pairings: Thirteen Reasons Why by Jay Asher, The Sandman Series by Neil Gaiman, How to Steal a Car by Pete Hautman, Liar by Justine Larbalestier, The Astonishing Adventures of Fanboy and Goth Girl by Barry Lyga, Boy Toy by Barry Lyga