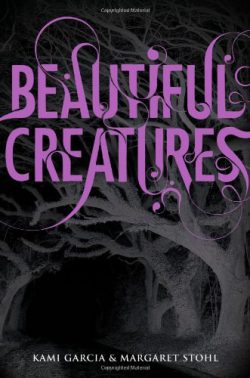 Only two kinds of people live in Gatlin, South Carolina: the stupid and the stuck. The others move on to better places. The Wates live there because they always have. They live there even though recent years have brought the family more bad memories than good.

Ethan Wate isn’t stupid and he has no intention of being stuck. Gatlin isn’t a complicated place. The neighbors keep watch from their porches in the unbearable heat, but nothing ever changes because there are no surprises in Gatlin County–the epicenter of the middle of nowhere.

At least, that’s how it seems to Ethan the night before starting his sophomore year at Stonewall Jackson High.

Turns out he couldn’t have been more wrong.

Change is in the air when Lena Duchannes arrives in town. Ethan is inexplicably drawn to the beautiful outcast, but nothing with Lena is straightforward. As Ethan gets to know the mysterious new girl they begin to unearth ages old secrets that could change everything for them and Gatlin County.

I’m not a big fan of Twilight (long story) and Swoon left me cold. But I finally get how the hardcore fans of those books feel because I feel the same way about Beautiful Creatures. Part gothic novel, part modern fantasy this book has everything a reader could hope for.

Garcia and Stohl have created an intricate and compelling story. Even at over 500 pages (hardcover),  this book is a page-turner. Ethan’s narration is honest and captures both the charm and horror of life in a rural Southern town.

Beautiful Creatures is also an utterly original and unforgettable book filled with haunting characters, excitement, and even some romance. The worst thing about finishing it is knowing there will be a wait for the sequel.

Possible Pairings: Compulsion by Martina Boone, Unspoken by Sarah Rees Brennan, Sea Change by Aimee Friedman, The Girl at Midnight by Melissa Grey, Unearthly by Cynthia Hand, House of Many Ways by Diana Wynne Jones, Dreamhunter by Elizabeth Knox, To Kill a Mockingbird by Harper Lee, Once a Witch by Carolyn MacCullough, The Glass Casket by Templeman McCormick, Jellicoe Road by Melina Marchetta, Lirael by Garth Nix, Shiver by Maggie Stiefvater, The Dolls by Kiki Sullivan, Paranormalcy by Kiersten White