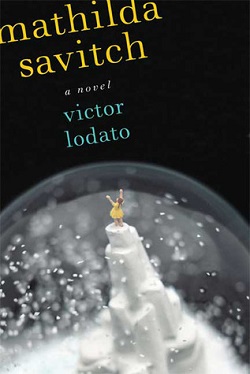 There is an important distinction that needs to be made clear before proceeding to the actual review of Victor Lodato’s debut novel Mathilda Savitch (2009): Some books are classified as young adult novels (books written for teenagers) because they capture some vital aspect of the adolescent experience. Other books might have a teen-aged protagonist but they are still very much an adult novel (a book written for adults) because of the voice or attitude of the book.

I am 99% certain that Mathilda Savitch falls into the latter category. And that’s fine. But this review is written very much because of the fact that I spend a lot of time reading young adult novels.

Mathilda wants desperately to be awful. Not just bad, but truly awful. She hurts things, even things she loves. As Mathilda will readily tell you, awful is easy if you make it your one and only.

It might seem that she is a spoiled child (I believe thirteen years old, but perhaps twelve) looking for attention and excitement. But really, Mathilda is living in the aftermath of a tragedy.

I have a sister who died. Did I tell you this already? I did but you don’t remember, you didn’t understand the code.

A year ago, Mathilda’s beautiful, perfect sister died. Helene’s death is shrouded in uncertainty. Her parents won’t speak of it, won’t unearth her possessions or open her room. Mathilda will tell you the details she knows. But it’s not enough.

Mathilda won’t stop investigating until she has the full truth about Helene’s death–a search that unfolds a secret life she never would have imagined.

The writing in Mathilda Savitch can be quite intricate. Lodato is clearly talented. But Mathilda herself is utterly unconvincing as a teen (almost child really) narrator. Her voice is too mature and her thoughts too bizarre. The tone here is very similar to The Curious Incident of the Dog in the Night Time by Mark Haddon–but even the narrator there was seventeen.

Lacking a narrator that I found convincing, it was impossible to really get into the story or particularly invested in the characters. Mathilda Savitch felt like it was trying to be something different than what the writing dictated, a problem that made the book seem at odds with itself and unconvincing, possibly as a result of having a teen character at the center of what is ultimately an adult book.