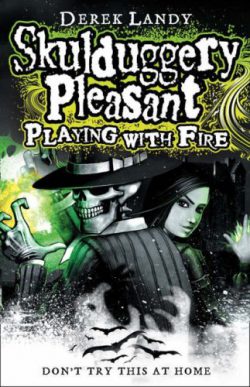 Playing with Fire picks up about a year after the first novel. Stephanie is officially apprenticed to Skulduggery Pleasant, learning more elemental magic, and helping Skulduggery fight crime under her taken name, Valkyrie Cain. Throughout the novel, it was impressive to see how deftly Landy handled the unusual name change of his main character as well as her negotiation of people who know her as both Valkyrie and Stephanie.

Skulduggery and Valkyrie are dealing with the usual mayhem and misfits when news of something really unpleasant comes their way. Baron Vengeous, one of Skulduggery’s old enemies, is back in town and dead set on bringing a monster called the Grotesquery back to life to wreak some havoc. Cobbled together from pieces of the most feared, not to mention brutal, monsters ever seen the Grotesquery has to be stopped before it becomes invincible. Oh and before it calls the Faceless Ones back to Earth to destroy everything.

With the help of Tanith Low, the two detectives set out to find and destroy the Grotesquery. But, as often happens, complications get in the way. In addition to possible corruption in the Council of Elders, Valkyrie and Skulduggery have to deal with Billy-Ray Sanguine–simultaneously one of the most likable and most horrifying villains of the series thus far.

On top of that, Valkyrie is beginning to feel like a stranger in her normal life as Stephanie Edgley. Using an enchanted reflection to go to school and otherwise act as her proxy, Valkyrie keeps telling herself that is the price for a life of adventure and magic. Still, as the problems mount and Valkyrie finds more twists and danger, it starts to seem like there will be a higher price to pay.

The important thing to remember about this series is that Skulduggery Pleasant was an insanely awesome, utterly original book. Given the high bar set by its predecessor, it was perhaps unavoidable that Playing with Fire would not be as good.

There is an old adage that before leaving the house a person should take off one accessory; if this book were a person, it would instead add one more. Landy piles villains on top of villains so that names begin to blend together and necessitate rereading. This novel is also rife with battle scenes–too many, really, in relation to the plot. Finally, and this one can be fixed, the end of the book left a lot of questions unanswered.

Taken together, these things lead to the possibility that Playing with Fire is a bridge book which serves more to transition from the first book and pave the way for the third book in the series than to stand on its own. (Clarifying example: Pirates of the Caribbean: Dead Man’s Chest was a bridge movie.) Thus, while much of this book was not as marvelous as the first it is still entirely possible and even likely that the third book The Faceless Ones (due out in August 2009) will be another powerhouse of a book.

The emblematic banter and humor were still present, but not often enough. Ironically, given the name of the series, Skulduggery Pleasant really did not have enough page time in this book.

Possible Pairings: The Demon’s Lexicon by Sarah Rees Brennan, Gideon the Cutpurse by Linda Buckley-Archer, A Taste for Red by Lewis Harris, Jackaby by William Ritter, The Amulet of Samarkand by Jonathan Stroud