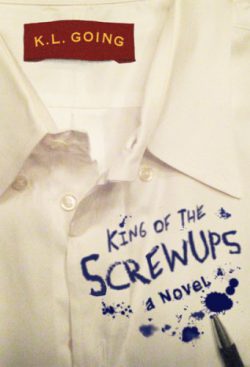 With a rich, important father and a famous supermodel mother, it’s no surprise that Liam Geller has been Mr. Popularity for most of his life. The spitting image of his beautiful mother, Liam has wanted to impress his father for years. The problem is that Liam always seems to screw everything up. After seventeen years’ worth of warnings about jeopardizing his future and never amounting to anything but the life of the party, Liam has resigned himself to being Mr. Popularity for the the rest of his life. It’s not like he has many other options.

That is until Liam screws up for the last time. Thrown out of the house with no place else to go, Liam finds himself living with his father’s brother in upstate New York. Living in a trailer with his gay, glam rock playing, DJ “Aunt” Pete was not how Liam planned to start his senior year in high school. Not even a little bit.

The more Liam thinks about his exile, though, the more he realizes this might be his best chance to earn his father’s approval. No more popular, athletic, fashion savvy Liam; instead Liam decides to make himself into the studious nerd his father always wanted for a son. The thing of it is, the harder Liam tries to make himself into the ideal son, the worse everything seems to get. Luckily for Liam, family and even father figures come in all shapes and sizes–even a glam rocking uncle no one expected to fit either part in King of the Screwups (2009) by K. L. Going.

In 2004 K. L. Going’s novel Fat Kid Rules the World (2003) was selected as a Printz Award Honor Book.At first I thought King of the Screwups (2009) was a surprising departure from that novel because it’s so funny and because Liam is such a different character from Troy. But now, thinking about the two, I realize they have more in common than I initially realized. Like her earlier novel, King of the Screwups is the story of a boy trying to find himself and connect with a family that keeps him at a remove.

Superficially, Liam seems to lead an ideal life and really have it all–good looks, popularity, money and privilege. Most people would think that would be enough to make a happy life. Going intersperses flashbacks throughout the story to show the chinks in Liam’s movie perfect life while also making Liam a highly developed and very well realized character. Liam has spent most of his life being cut down by his father’s offhand remarks and watching his mother receive similar treatment while still taking her husband’s part in every fight. As the story progresses Liam realizes there is more to life than seeking approval and that, sometimes, you have to screw up before you can really succeed.

Some parts of this story were heartbreaking to read but ultimately King of the Screwups is a funny and uplifting story about family (and fashion) that will appeal to just about everyone. The book cover (designed by Christine Kettner, with a photo by Shani Frymer) is also excellent; simple and classy, it is the perfect embodiment of the story within.

Possible Pairings: Someday This Pain Will Be Useful to You by Peter Cameron, Boy Proof by Cecil Castellucci, Can’t Look Away by Donna Cooner, Girl Overboard by Justina Chen Headley, Where I Belong by Gwendolyn Heasley, Confessions of a Not It Girl by Melissa Kantor, Isla and the Happily Ever After by Stephanie Perkins, The Beginning of Everything by Robin Schneider, Confessions of the Sullivan Sisters by Natalie Standiford, The Spectacular Now by Tim Tharp