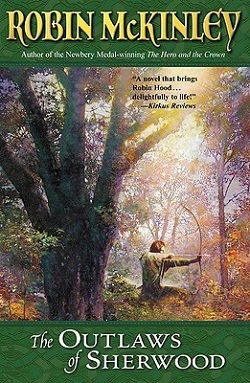 Despite my knowing of Robin McKinley for a number of years and even thinking I was familiar with her books, The Outlaws of Sherwood (1988)–find it on Bookshop–is the first novel I have read by her. It was also my first encounter with a retelling of the legend of Robin Hood (aside from the Disney movie).

Set in the time of King Richard the Lionheart, this story starts with a young man named, unsurprisingly, Robin. A forester working in the King’s Forest (Sherwood Forest to be exact) to keep the land holding he inherited when his father died, Robin is looking forward to the festivities and diversion sure to be offered by the Nottingham Fair.

But, like many of the arrows he notches without accounting for vagrant breezes, Robin’s plans quickly go awry. By the end of the day a man is dead in Sherwood and Robin has a price on his head.

Left with no other options Robin is urged by his friends Marian and Much to go into hiding and serve as a rallying point for other like-minded Saxons who are chafing under the oppressive Norman rule, and unjust taxes, throughout England.

Robin resists this plan at every turn trying to be pragmatic and responsible for the people who come to trust his leadership. But, as the number of outlaws hiding in Sherwood grows, he soon finds that he has a new name and has moved from mere mortal to a legend named Robin Hood.

McKinley takes an interesting approach here writing not only about the legend of Robin Hood but of how it was born. If one can use such terms with a legend, I’d say that McKinley’s interpretation is very realistic. As her narrative suggests all too clearly, Robin is just a man. He only becomes a legendary figure through the help of his friends and because the Saxons need him to be so.

It was also interesting that the events of the novel do not, in fact, always center on Robin Hood. As the title, The Outlaws of Sherwood, suggests McKinley provides a variety of perspectives in the novel using multiple viewpoints to convey complex events while also examining the motives that led each of the outlaws to Sherwood. While she is clearly very fond of the characters and the legend itself, it seems telling that one of McKinley’s principle characters in terms of plot and narrative point of view is one who was never mentioned in the original tales of Robin Hood and his Merry Men. (It might also be telling that my two favorite characters were Little John and Cecil, but that’s a different matter entirely.)

In a way, Robin Hood is often not the focus of the story although he is inevitably the driving force behind the novel. McKinley offers enough of Robin’s perspective to convey his character–a perhaps less heroic version of the famous archer than some readers might expect. McKinley shows how Robin  comes to terms with his new-found fame and protecting the people that come to him seeking a new life away from Norman rule. Keeping Robin Hood at a remove, if you will, from the narrative allows McKinley to present Robin her way while also showing–via other characters–how Robin’s status grew from mere outlaw to legend as well as why that might have happened.

The writing here is intricate with long sentences, elaborate wording, and dialogue that looks more like prose on the page than a verbal exchange. In relation to this particular book, all of those things work to the author’s favor helping her to create a prose style that feels very authentic in relation to the time period of the story. The style will, however, likely bother readers looking for a quick read.

There are many reasons to like The Outlaws of Sherwood. It has eminently likable characters, action, romance, suspense, and even humor. And yet, after finishing the book, my feelings are lukewarm. I found the ending so wholly unsatisfactory that I immediately set out to research how the original stories of Robin Hood ended. I was dismayed to find that compared to some legends (where he is killed!) Robin and his fellow outlaws actually get off quite easy here. Thus I am obliged to lay some of the blame with the legend itself, rather than merely at the author’s feet. This knowledge only confirms my strong conviction that sometimes heroes really do just need to ride (or walk) off into the sunset. That was not the case in The Outlaws of Sherwood and I have to say I think the story was the worse for it.

After doing my own research into the myth and characters, I can say that McKinley was as true to the facts as possible. In her afterword, McKinley admits that she was more concerned with writing a book that was “historically unembarrassing” than completely accurate. Nonetheless, most of her characters* do appear in the original legends.

*The characters that appear in both The Outlaws of Sherwood and the original tales of Robin Hood: Robin Hood, Maid Marian, Much the Miller’s Son, Little John, Will Scarlet, Friar Tuck, Alan-a-Dale, Sir Richard of the Lea, the Sheriff of Nottingham, and even Guy of Gisbourne.

Also, if you want to hear Ms. McKinley’s view on why things had to end so horribly, I stumbled upon this interview while trolling around earlier.

Possible Pairings: The Girl of Fire and Thorns by Rae Carson, Graceling by Kristin Cashore, The Wicked and The Just by J. Anderson Coats, Scarlet by A. C. Gaughen, The Lost Sun by Tessa Gratton, Finnikin of the Rock by Melina Marchetta, Song of the Sparrow by Lisa Ann Sandell, Sherwood by Meagan Spooner,  A Well-Time Enchantment by Vivian Vande Velde, The Guinevere Deception by Kiersten White