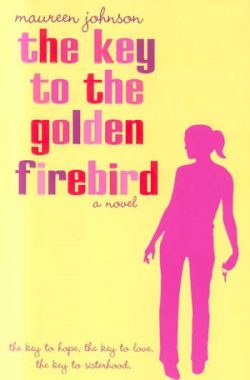 I’m embarrassed to say that this book has been on my to read list for almost as long as it has been published. But then I started following the author’s blog and her twitters and they were so amazing that the idea of still not reading any of her books became unbearable, especially since the author is so awesome that I want to write to her and ask if we can be friends. So, last week I put every YA book I could think of that I had been dying to read on hold. The Key to the Golden Firebird (2004)  by Maureen Johnson was at the top of the pile.

May doesn’t always understand her older and younger sisters, she isn’t even sure she looks like them. But even though May lacks their athleticism or general interest in sports, the three Gold sisters were family; they always had each others’ backs.

That was before their father’s death shattered their previously strong family unit.

Brooks, the eldest, is so busy drowning her sorrows that everything else begins to fall to the wayside. Things get even worse as she begins to run with the wrong crowd and her drinking escalates.

Palmer, the youngest of the Gold  sisters, is trying to understand all of the changes at home while being the youngest member of her school softball team. But as the pressure and anxiety build, Palmer begins to wonder if she’ll ever be able to cope with anything ever again.

That leaves May, the smart, responsible middle sister. While her mother is working overtime and her sisters struggle through their own crises, May is left to handle the more quotidian tasks of making dinner and otherwise ensuring the continued (albeit relative) stability of their household. Adrift among a family in crisis, May is putting on a brave face as she balances work, school, and the even more daunting task of learning to drive. When May’s lifelong friend, and sometime nemesis, offers to teach her to drive things get even more complicated. Unlike driving, there are no instructions for grieving . . . or falling for the last person you ever thought you would.

As the girls drift apart each gravitates, in their own way, to their father’s 1967 Pontiac Firebird and also the site of his death. The Golden Firebird might be a horrible reminder of everything the Golds lost, but it might also be the key to finally moving on.

This book is written in the third person. Segments are told from each sister’s perspective with the bulk of the story going to May since it is, arguably, her book. Initially the structure was surprising, but it makes sense since a significant amount of this novel is about how the Gold sisters relate to each other–seeing events from each of their perspectives both complicates and clarifies these relationships. The novel artfully traces the healing process of each sister, and the family at large. Although some things remain up in the air the story ends, as it should, with a sense that these characters will make it through.

Johnson became one of my favorite writers before I ever opened one of her books, but The Key to the Golden Firebird showed that my admiration was well-founded. The story here is incredibly compelling and the characters come alive on the page.

Possible Pairings: If I Stay by Gayle Forman, To All the Boys I’ve Loved Before by Jenny Han, The Miles Between by Mary E. Pearson, A Map of the Known World by Lisa Ann Sandell, The Edge of Falling by Rebecca Serle, Unbreak My Heart by Melissa C. Walker