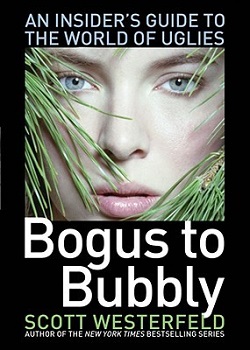 Sometimes, when a book series gets really popular, writers will try to cash in by writing unauthorized guides to the story or books about the “science” behind popular fantasy titles. Then, rarely, you get a book like Bogus to Bubbly: An Insider’s Guide to the World of Uglies (2008) that was actually written by the ultimate insider: Scott Westerfeld.

Uglies is a series of books (one trilogy and a companion book) about a world in the future where in order to prevent war and strife everyone gets plastic surgery to be beautiful and live long. Everyone else, by contrast, is ugly. That is the super, super short explanation of the series which is more complex. I don’t recommending reading this guide before the series because it contains spoilers and, truth be told, unless you know you like the books this guide will not be that interesting.

Westerfeld explains a lot of things in this book. He discusses where the idea for the story came from, as well as how he thought of skintennas and the Rusties. Parts of the book also explain technology, history, and culture surrounding the worlds created in the Uglies series.

What I liked about the book was that it mentioned a lot about the writing process. While Westerfeld himself notes that it’s hard to trace the origin of ideas, this book does try. It’s interesting to read how a dentist visit inspired several aspects of the book while, thankfully, we are not the entire inspiration behind the Rusties. Explanations of names and slanguage were also very informative and interesting.

I was less enthralled by the technology information. It was fun to hear about the science of beauty, but the information about magnetic levitation, hoverboards and inventions got a bit, well, technical. Although I fully admit that could be me since Uglies is one of the few straight sci-fi series I read (I usually go in for fantasy which, having dragons and what not, is guaranteed to be less technical). There is also a bit of repetition with the books revealing much of what Westerfeld puts together in Bogus to Bubbly but that is probably inevitable with an insider’s guide like this.

Aside from content, I liked the book’s organization. It’s written like a real guide with cross-referencing between sections and an index. The book also includes illustrations and maps which helped a lot to visualize the city as it was meant to be seen.

While the entire book might not be read-worthy for every fan, it’s very likely at least one nagging question about the series will be answered in this book. Mine, for instance, being whether belly sensors were indeed belly button rings or not. Readers will also leave the guide with a new insight into how the writing process might work. On top of that, Bogus to Bubbly also includes a preview of Westerfeld’s new series Leviathan.

My only serious regret is that the Awesome Librarian Clique only warranted passing mention (though since they didn’t factor in the books at all, perhaps that is to be expected).
____
Sound good? Find it on Amazon: Bogus to Bubbly: An Insider’s Guide to the World of Uglies