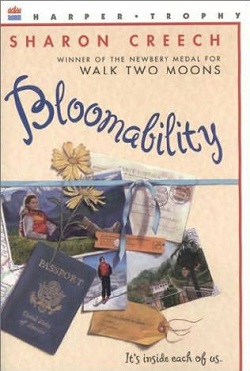 Sharon Creech won the Newbery Medal for “the most distinguished contribution to American literature for children” in 1994 for her novel Walk Two Moons. Bloomability, from 1998, is one of Creech’s later novels for children.

Thirteen-year-old Domenica Santolina Doone, known to almost everyone as Dinnie, does not have what most people would consider a mundane life, let alone an average one.

“In my first life, I lived with my mother, and my older brother and sister, Crick and Stella, and with my father when he wasn’t on the road.”

As Dinnie’s father, a Jack-of-all-trades by name and choice, moves across the country in search of new “opportunities,” Dinnie and her family follow.

“By the time I was twelve, we’d followed my father from Kentucky to Virginia to North Carolina to Tennessee to Ohio to Indiana to Wisconsin to Oklahoma to Oregon to Texas to California to New Mexico. My things fit in one box.”

There was also a stint in Arkansas so brief that it escaped Dinnie’s recollection. As some readers might have guessed, this lifestyle did not always work out for the family. The crux of the novel begins when Dinnie makes this series of observations:

“Dad was on the road, Crick was in jail, and Stella was having a baby.

And that was the last week of my first life.”

That’s when Dinnie is kidnapped by two complete strangers. At least, that’s how it seems to Dinnie. No one else seems to agree. But, just because she met her Aunt Sandy and Uncle Max twice before, it doesn’t make them like her real family. At least, not right away.

Dinnie’s aunt and uncle take her off to Switzerland for an opportunity of her own as a student the school where Max will be headmaster and Sandy a teacher. At first, Dinnie doesn’t see how any of that is an opportunity. But then she gets to the school and starts to meet some of the other students. Coming from all over the world, and from many different cultures, everyone is different. For the first time in Dinnie’s life, she isn’t the only stranger. Miles away from her family and in a foreign country, Dinnie might finally have a chance to find herself.

Along the way, she also finds friends (and family) that she never would have encountered anywhere else. Creech does a great job here of showing different cultures. The book is a nice example of a truly international book. It also might teach readers a thing or two about the importance of tolerance. In fact, I’m sure it could be used in a variety of classes as a teaching tool even if I can’t get into all of the ideas in this review. It’s also written in a very authentic, humorous voice.

The title of this book, Bloomability, refers to possibilities–a recurring theme in the novel. Dinnie isn’t happy about a lot of the things she has to do, but as she soon learns, every change is an opportunity and a new possibility. On a personal level, this book is actually a really relevant review for the week, and I’m sure most other readers would also find it has some valuable insight to offer during times of change.