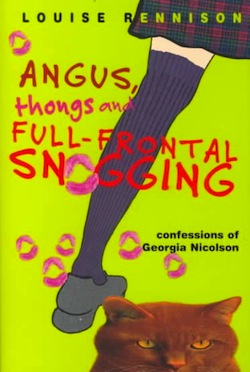 There are six things very wrong with fourteen-year-old Georgia Nicolson’s life at the beginning of her first diary volume Angus, Thongs and Full-Frontal Snogging (2000) by Louise Rennison (find it on Bookshop):

(1) I have one of those under-the-skin spots that will never come to a head but lurk in a red way for the next two years.

(3) I have a three-year-old sister who may have peed somewhere in my room.

(4) In fourteen days the summer hols will be over and then it will be back to Stalag 14 and Oberfuhrer Frau Simpson and her bunch of sadistic “teachers.”

(6) I went to a party dressed as a stuffed olive.

My friend “Barbie” is insanely fond of Louise Rennison’s Georgia Nicolson series, starting with Rennison’s debut novel Angus, Thongs and Full-Frontal Snogging which was selected as a Michael L. Printz Honor Book in 2001. Having some free time after graduation, I decided to give the series a try. I read the first two books in as many days. Angus, Thongs and Full-Frontal Snogging is quite funny and I did like it, but the more I read the more I felt like I shouldn’t like it.

Georgia is not always the nicest person. She can be self-centered and rude. But she is so funny that it’s hard to be angry about it. As Georgia tries to figure out exactly what growing up means (aside from landing the Sex God), she often finds herself in some awkward situations (see the mention of a stuffed olive above). Although a lot of the book is outlandish in its humor, Rennison’s anecdotes are generally spot on in terms of authenticity. I have the old pictures with uneven eyebrows to prove it.

Part of my problem with this novel is that I couldn’t gauge if the voice was accurate. To me, Georgia’s diary reads more like that of a sixteen-year-old but after consulting with “Julie” it seems that Georgia’s misadventures could be accurate. Not having been the same kind of fourteen-year-old as Georgia, I needed some outside confirmation.

It also bothered me (though not enough to stop reading the series) that Georgia largely seemed exactly the same at the end of the novel as she did at the beginning. It doesn’t make the book better or worse, but it was something I noticed. If you want to see a similar book with more character evolution, check out Alice, I Think by Susan Juby another laugh-out-loud funny diary book with a teen narrator albeit a Canadian one this time.

All that aside, this book is hilarious. I’m usually hesitant of diary-style books but it works well here. Rennison uses the technique to amusing effect by including the time of certain entries to illustrate Georgia’s often rash temperament. Part of me wants to take Georgia under my wing and save her from herself, but the rest of me knows that if I did that I wouldn’t be able to enjoy the rest of Georgia’s books. Oh the moral dilemma . . .

For some added fun, be sure to check out Georgia’s glossary of English terms at the end of the book.

Possible Pairings: Boys Don’t Knit by T. S. Easton, Ghost Huntress by Marley Gibson, The Popularity Papers by Amy Ignatow, Alice, I Think by Susany Juby, Confessions of a Not It Girl by Melissa Kantor, Saving Francesca by Melina Marchetta, Sloppy Firsts by Megan McCafferty, Sucks to be Me by Kimberly Pauley, Gabi, A Girl in Pieces by Isabel Quintero, My Big Nose and Other (Natural) Disasters by Sydney Salter

One thought on “Angus, Thongs and Full-Frontal Snogging: A Chick Lit Wednesday review”