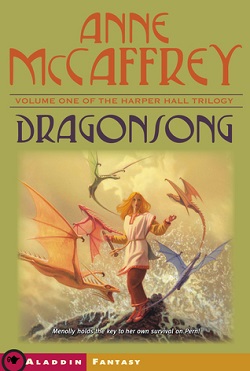 A brief forward to the review: Dragonsong (1976) is the first book in Anne McCaffrey’s Harper Hall trilogy. (Find it on Bookshop.) The series is generally catalogued as children’s (at least in the nypl catalog) but is really for any readers. Like many of McCaffrey’s novels, it’s set in the world of Pern. I haven’t read anything but this trilogy yet, but am pretty sure these novels (from the 1970s) operate as prequels to the other more adult oriented novels. Oh, and I absolutely loved the entire trilogy.

On to the review:

Menolly was born in the small fishing village of Half Circle Sea Hold on Pern. Despite her father’s leadership position in the community, Menolly finds herself with very little freedom–especially freedom to make music, her one bliss. When Petiron, the village’s old Harper, passes away Menolly’s parents realize with some horror that their daughter is the only one who can take up the Harper’s duties until a replacement is sent from the Harper Hall.

Once this replacement arrives, Menolly is ordered to abandon her music (even in her head) on threat of physical harm in order to save her family and the hold from the scandal of having produced a girl Harper. Her hopes shattered, Menolly runs away from the hold and takes refuge in a beach cave where Menolly discovers a nest of the much sought after (and semi-mythical) fire lizards. After finding her new friends, things begin to look up for Menolly who realizes that anything is possible if you aren’t afraid of going after what you want.

There’s more to the plot, of course, but all of that is better learned by reading the book instead of this review.

Dragonsong is written in what I would call an understated style. McCaffrey isn’t at pains to illustrate her talent as a writer–she knows she’s good and has a story worth telling. Having never read about Pern, I wasn’t sure what to expect. Despite a mildly confusing start, McCaffrey created a story here that functions as a standalone from the larger world of the Pern series. Furthermore, she also expertly builds up the landscapes and cities of Pern the better for readers to imagine them.

The other thing that I really like about this story is that it has a fairly narrow focus. The novel centers on Menolly and her journey to the Harper Hall. There are a lot of stories out there about girls who are told they don’t deserve much from life, or girls who think they can’t do what they really want to do. In a way, Menolly has that problem–especially because of her parents. But she’s more than that too. As the novel progresses, Menolly begins to realize with the help of her friends (fire lizard and otherwise) that she deserves better and that there is more to life than pleasing others.

So, on the one hand we have a wonderfully written fantasy novel that is arguably the first word on Dragon stories in the genre. On the other hand we have the story of a girl finding her own way in the world as she discovers that she’s a much stronger, smarter and more vibrant girl than her parents would have her believe.