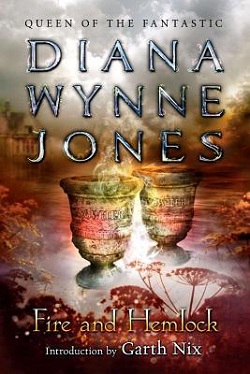 Diana Wynne Jones is at the top of my list of best fantasy writers for children and young adult fiction (along with Vivian Vande Velde and Garth Nix). Her books are well-crafted, rich enough that I’d say most could be crossover adult books, and truly original.

Fire and Hemlock (1970) (find it on Bookshop)  is one of my favorite books by Jones. It’s place as number one is rivaled only by Howl’s Moving Castle. Fire and Hemlock is a modern retelling of the ballads of Tam Lin and Thomas the Rhymer–Scottish legends about woman wooed by a fairy man whom she has to hold onto through a variety of obstacles to save him from being a sacrifice in the fairy realm. Fire and Hemlock veers pretty far from that original premise so it isn’t necessary to be well-versed in the related lore to follow the story.

It all started nine years ago when Polly walked in on a strange funeral at the mansion next door. After that Polly came into possession of an entrancing picture of burning bales of hay called “Fire and Hemlock.” Nine years ago was also when Polly began having adventures with Tom Lynn–a man she can barely remember in her “normal” memories.

Told in Polly’s present and flashbacks to her not normal memories, the novel follows Polly’s efforts to separate fact from fiction and discover why everything changed before it’s too late.

There is no gentle way to say this: the novel starts slow. Faithful readers will be rewarded once they get into the narrative, but that does take time since the story starts with Polly doing little more than packing her bags. The style is common as Jones blends elements of the modern world with old world elements (the Tam Lin lore here).

Polly and Tom’s interactions are the bread and butter of the story. The dialogue between them is vividly authentic and humorous. Tom Lynn is one of those dashing heroes that come up too rarely in contemporary fiction while Polly is a persistent, strong young woman who most parents would want their daughters to see as a role model.

The writing here is strong. Jones creates an interesting story. My only qualm is that the ending gets quite confusing, requiring several readings to make sense of exactly what happens. Despite that weakness, the book as a whole is amazing. It’s a fantasy without being too fantastic, a romance without being too mushy.

Possible Pairings: The Hazel Wood by Melissa Albert, The Impossible Knife of Memory by Laurie Halse Anderson, The Darkest Part of the Forest by Holly Black, The Game of Love and Death by Martha Brockenbrough, Entwined by Heather Dixon, The Accident Season by Moïra Fowley-Doyle, Caraval by Stephanie Garber, The Ten Thousand Doors of January by Alix E. Harrow, Guardian of the Dead by Karen Healey, Cruel Beauty by Rosamund Hodge, Princess of Thorns by Stacey Jay, Salt & Storm by Kendall Kulper, Thomas the Rhymer by Ellen Kushner, Ella Enchanted by Gail Carson Levine, Wildwood Dancing by Juliet Marillier, The Glass Casket by Templeman McCormick, Beauty by Robin McKinley, Gods of Jade and Shadow by Silvia Moreno-Garcia, Angel Mage by Garth Nix, The Perilous Gard by Elizabeth Marie Pope, Vassa in the Night by Sarah Porter, Unspoken by Sarah Rees Brennan, The Winner’s Curse by Marie Rutkoski, The Near Witch by Victoria Schwab, The Ghosts of Heaven by Marcus Sedgwick, The Raven Boys by Maggie Stiefvater, The New Policeman by Kate Thompson, Extraordinary by Nancy Werlin, The Replacement by Brenna Yovanoff, Dust Girl by Sarah Zettel

One thought on “Fire and Hemlock: A Chick Lit Wednesday Review”