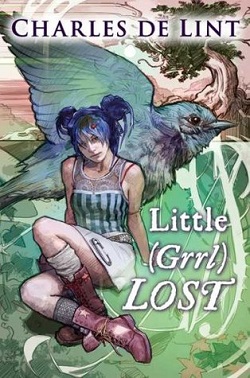 Little (Grrl) Lost (2007) is Charles De Lint‘s latest novel set in the fictitious city of Newford, the setting for much of De Lint’s work that helped to establish the urban fantasy genre. The Blue Girl from 2006 is another novel set in Newford (Cliff note plot to that book: Punky teen Imogen wants to start fresh, and mistake-free, when her family moves to Newford. She makes friends with Maxine, straight-laced girl with an overprotective mother. As time passes the girls observe strange happenings at their school and wind up matching wits with some very mean fairies among other things.)

The story in Little (Grrl) Lost is refreshingly straightforward for a fantasy: Fourteen-year-old T.J. is furious when her family has to leave their farm and move to Newford. To makes matter worse, T.J. has to leave behind her horse, Red, and her best friend. T.J. has a hard time adjusting to city life and making new friends–until she meets Elizabeth: a punky teenager who lives with her family in the walls of T.J.’s house. Elizabeth is a Little by name. And literally, standing only six inches tall.

As time passes, the girls form an unlikely friendship and begin an even more surprising adventure as they navigate their way through Little-lore and the urban streets of Newford as T.J. tries to help Elizabeth find her way in the Big world (and maybe find her own place in Newford at the same time).

This novel is extremely complicated stylistically. The story is told in multiple points-of-view with varying narration styles. The amazing thing about this technique is that De Lint still manages to create a seamless narration. He transitions between sections easily without being redundant or leaving the reader at a loss.

In order to better establish the difference between the narrations, De Lint writes T.J.’s section using the traditional third-person, past tense narration (“Jane walked to the store.”) incorporating periods from Geoff or Jaime’s perspective to flesh out certain events. Elizabeth’s sections, on the other hand, are written in the first-person, present tense (“I walk to the store.”), a style that is becoming very common in contemporary novels. (This style is also what makes Elizabeth’s sections of the narration sound more like De Lint’s other YA Newford novel, The Blue Girl.)

Most of the novel is set in the course of two very eventful days for the girls. Nonetheless, the narrative feels expansive. De Lint takes his time, fleshing out the details of T.J. and Elizabeth’s adventures. The story is also fairly light, maintaining a generally upbeat feel.

The important thing to remember about the story is that T.J. is fourteen while Elizabeth is sixteen or seventeen. For this reason, T.J.’s sections of the story read younger than the rest. And rightly so. In addition to creating very individual “voices” for the protagonist’s, De Lint also makes their age difference (and personality differences) clear with the divergent focuses of their narrative segments. That’s really hard to do without making the characters seem exaggerated or flat.

Unfortunately, for prolific authors like De Lint comparisons become inevitable. The most obvious one being between Little (Grrl) Lost and The Blue Girl because the novels are both YA and close together in terms of publications. To be clear, this is not a fair comparison. The Blue Girl is longer which means it has more space to deal with plot issues, and the characters are older which means they are not going to sound like T.J. In fact, beyond being set in Newford, the books have nothing in common.

Little (Grrl) Lost does, however, have the same character types as The Blue Girl: punk “bad” girl (Elizabeth/Imogen) and normal “goody-two-shoes” girl (T.J./Maxine). The difference is that the “good girl” gets a chance to voice her own opinions instead of leaving all of the narration to her best friend. This narrative split does, of course, create a different kind of novel but it is used here to good effect.

Despite its relatively short length, Little (Grrl) Lost is rich with detail, but the narrative is never over the top with description or explanation. Even with its numerous narrative voices, the story is never redundant. Basically, Little (Grrl) Lost gets everything right in terms of writing conventions. De Lint once again brings Newford and his characters (Big or Little) to life in this vivid and magical novel.