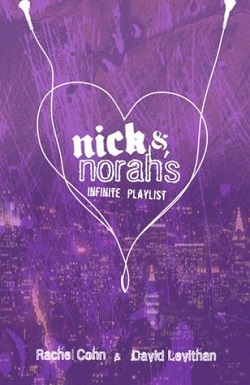 Nick and Nora Charles, as played by the inimitable William Powell and Myrna Loy in The Thin Man (1934) were a married couple who solved mysteries while sipping cocktails and exchanging witty repartee with anyone who would listen. They were iconic symbols of glamour and charm.

It is no coincidence that authors Rachel Cohn and David Levithan decided to give the protagonists of their first collaborative novel Nick and Norah’s Infinite Playlist (2006) the same names. Giving a nod to one of the greatest movie couples of all time, their novel presents another charming, witty couple sure to entice readers.

Written in alternating chapters, this novel gives equal time to both protagonists. Cohn wrote Norah’s part and Levithan wrote Nick’s part, but as the book jacket notes they are not really Nick and Norah.

The story starts in the middle of the night at a club on Ludlow Street in New York City. Nick is “the nonqueer bassist in a queercore band who is filling the room with undertone” as his band tears through their set. His life feels pretty great until Tris, The Ex, walks into the club. That’s where Norah comes in.

Norah is “the daughter of an Englewood Cliffs-livin’, fat-cat record company CEO” who happens to be in the right place at the exact time that Nick really needs a five-minute girlfriend. That also happens to be right when Norah needs to get a ride home for her friend Caroline.

In other words, they need each other.

Nick and Norah’s deal also sets the stage for the novel: a first date that makes it through the club scene in New York, a date where everything goes wrong (or maybe it goes right), a date that goes on and on—in a good way, mostly.

Nick and Norah’s Infinite Playlist is consequently a fast story. Events jump around and the prose moves just as quickly. Cohn and Levithan keep up this speed with their narratives which have the verve appropriate to a hip novel about hip teens.

The narrative of both writers here is really tight. Cohn and Levithan do a great job keeping the story coherent as they alternate chapters without getting redundant. Dual narrations often run the risk of seeming gimmicky, but it here it’s truly effective. The narratives overlap enough that readers get to see key events from Nick and Norah’s point of view. This technique helps to give a fuller version of the story as well as humorously showing how differently two people can see the exact same thing.

“Nick and Norah’s Infinite Playlist” is a crazy ride of a novel. It has music, borscht, romance, and some great dialogue, all of which made it an ideal candidate for a movie adaptation.

The film version of Nick and Norah’s Infinite Playlist is due for release on October 3, 2008. Trailers suggest that the movie will be just as fun as the book, although perhaps with a Michael Cera-nian twist on some of the humor. Luckily, at a mere 192 pages in paperback, interested readers will have no problem plowing through the book before heading to the movie as informed viewers.

Possible Pairings: If I Stay by Gayle Forman, The Astonishing Adventures of Fanboy and Goth Girl by Barry Lyga, Once a Witch by Carolyn MacCullough, This Song Will Save Your Life by Leila Sales, The Last Days by Scott Westerfeld, The Thin Man (movie)

The children’s room has a display space for a book called “pick of the litter.” The sign has a picture of a puppy. Last week a little girl was checking out books and saw the sign and excitedly asked what it was about . . .

Miss Print: “It’s a book that the library really likes and thinks people would want to read.”

Little Girl: “Oh. I thought it meant a real dog.”

A couple days later another little girl with an amazing sense of style also asked about the sign. I explained that it had nothing to do with real dogs in the library. She replied that she thought the library was sponsoring some kind of animal adoption program. I told her that we were not, but it was a really good idea.