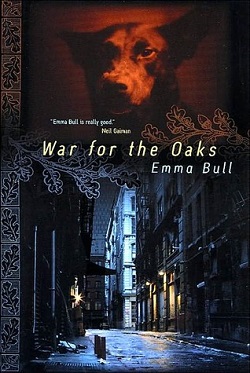 I’ve had a copy of this book on my shelves for three years and finally found the time to read it this summer. Being a bit more of an adult book than a lot I’ve been reading lately, the print was a bit smaller and it took a little longer to read. But it was soooooo worth it.

I’ve come to the conclusion that any story with a phouka (alternately spelled pooka) is better for it. Harvey (with James Stewart) made brilliant use of this creature. Emma Bull does the same in War for the Oaks. Originally published in 1987, this book is set in Minneapolis where Eddi McCandry is trying to make a living as a rock and roll musician. When the novel starts, Eddi’s prospects in the music department are not so good. To make matters worse, she is soon recruited by the Seelie Court to help them make war. That’s right, Eddi is drafted into a faerie war. In order to keep her safe (until she has to risk her life in battle), the phouka is dispatched as her bodyguard.

There is something kind of awesome about a book that can combine rock music with something as fantastical as faeries. Bull does it wonderfully. Each chapter title is a song. Music excerpts abound throughout, sure to entertain even those of us unfamiliar with music of that period. Bull also spends a lot of time describing the process of making music–what the band sounds like on stage, how rehearsals go, etc. Instead of being boring or draggy, they’re really interesting and show how very much effort goes into this process.

At times the plot seemed a little predictable, but I’m still not sure if that’s just because I’ve been reading quite a few fantasy books lately instead of from anything in the writing. It doesn’t really matter though because it’s not a bad predictability. Rather, it’s the kind that leaves a sense of satisfaction because it feels like the plot is going along as it should be.

Bull’s writing style was down to earth without being stale and her characters will not easily be forgotten. The phouka, in particular, is a favorite for too many reasons to enumerate here. So, if you haven’t guessed, I strongly recommend this book. If you like music, if you like phoukas, if you like fantasy, if you need something to read, if you believe in magic–this book is for you.